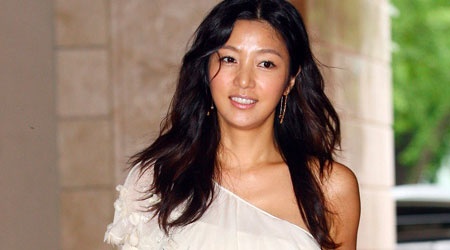 Variety
by B. Jung

Korean actress Jang Jin-young passed away Tuesday evening after losing a battle against stomach cancer. She was 35.

Jang had been hospitalized in Seoul after her condition recently
worsened and doctors had reportedly been giving her morphine and other
drugs to relieve the pain.

The news of the actress’ sudden hospitalization Tuesday startled fans,
as it was thought that she was recovering after resting for a month in
Los Angeles.

Jang was diagnosed with stomach cancer in September last year when she
paid a visit to the hospital for a regular checkup. What she thought
was a stomach ulcer turned out to be cancer, and Jang has been out of
the public eye ever since.

“Actress Jang Jin-young passed away today at the Seoul St. Mary’s
Hospital at Catholic University of Korea. Even after she was diagnosed
with cancer, she was always positive and tried to pay back the love and
support her fans sent her. We will remember her passion toward films
and we hope she stays in our hearts forever,” Jang’s agency, Yedang
Entertainment, said through a press release.

After winning the Miss South Chungcheong Province beauty pageant in
1992, Jang started her career as a model. She made her first appearance
as an actress in 1997 in the television miniseries “The Angel in Me”
(KBS). She continued to appear regularly on television before making
her big screen debut in the 1999 horror film “Jaguimo” starring Kim
Hee-seon. Her first big hit was the movie “The Foul King” in 2000,
and from then the actress was seen in numerous films such as “The
Siren” (2000), “Sorum” (2001), “Over the Rainbow” (2002), “The
Scent of Love” (2003) and “Singles” (2003).

In the horror film “Sorum,” Jang played a mysterious wife with a
secret and won the Best Actress Award at the Blue Dragon Film Awards.
The hit movie “Singles,” where she played the quirky character
Na-nan, also got her the same recognition at the 2003 awards. Her
character in “Singles” was a big hit among young women, with many
changing their hairstyles to the short and curly hairdo the actress
wore in the film.

“The Scent of Love” was also one of her best known works, where Jang played a patient diagnosed with stomach cancer.

In 2006, Jang joined fellow actor Kim Seung-woo for the movie “Between
Love and Hate” and won the Best Actress Award at the Korean Film
Awards.

The actress returned to the television screen in 2007 in the drama
“Lobbyist” with fellow actor Song Il-guk. She was diagnosed right
after the drama finished.

Along with numerous films, the actress also appeared in various commercials ranging from cosmetics to electronic goods.

A ceremonial funeral hall will be set up at the ASAN Medical Center in southern Seoul.

Jang Jin Young
How does this article make you feel?