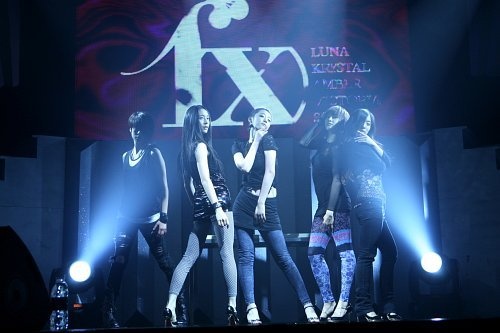 f(x) at their debut showcase performance!

SM Entertainment’s upcoming girlgroup f(x) have had their debut showcase performance on 2nd September. And at the debut showcase, the group showed off their dance, rap and song capability through their 3 years of training.

The performances the group put up during the showcase:

The special charisma and features of each member as mentioned during the showcase:

The average age of the members in the group is 16 years old. And what their name means:

Victoria said during the showcase, “With the showcase today, we hope to start receiving love from fans in Asia and be a great group. We will continue to work hard in the future.”

Some of the audiences’ responses:

Meanwhile, the MCs to the showcase are the group’s seniors Super Junior Lee Teuk and So Nyeo Shi Dae Sunny. Other SM artistes like So Nyeo Shi Dae and SHINee were also present.

And the girls will have their debut performance coming 5th September on MBC Music Core.