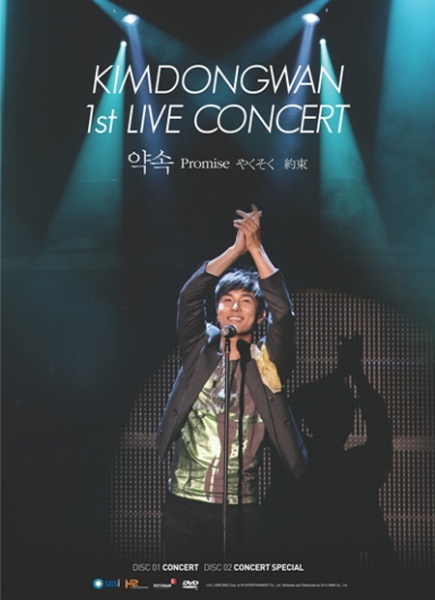 Concert DVDs are truly something aimed at fans rather than encouraging new followers, and this was really no exception to that rule. It is always a worry though that even in this era, there can be hastily produced goods of poor quality just to gain a few pennies from devoted followers. Fans do not like to be disappointed or feel cheated in anyway, but that wouldn’t be so for this particular DVD. That the front cover of the box had the concert name in four languages was very encouraging, as well as the high quality and clear pictures of the accompanying photo book.

The menu was nicely laid out with a choice of playing all or selecting one of the 19 sections should you have a favorite moment. There are two pages, though the arrow for the next page was a touch too subtle. You can select audio and subtitles here also for both the concert and the commentary.

I chose to listen to the commentary because this was a bit more unusual to have. It consisted of Kim Dongwan sharing small details of how he felt at the time he performed, small snippets of information about songwriters and some anecdotes too. The concert itself isn’t muted and the commentary is usually just at the start of the song, so you still get to enjoy the performance.

The mix of songs was excellent with those from his albums as well as some cover versions of x-japan and Bon Jovi. A duet with a singer/songwriter from the same company called JULY who wrote one of the songs on Dongwan’s album was impressive as well as those with Kim Jae Sook from ‘Wanted’ and Kim Hyun Chool whose song he was covering.

The subtitle quality was quite good, even thought he songs themselves weren’t subbed, though a couple of times they didn’t quite make sense or a wrong word was used, but they were better than I thought they would be! Shinhwa fans too will be sad to note that none of the members vocal appearances are included, something I can only assume is partly due to copyright reasons from them all being at different companies for solo activities. I think also that too many guest appearances would stop it seeming like a solo concert!

There are three extras on the second disc – the first which is about 35 minutes is the 1010 radio special where guests Younha and then Minwoo chat with Dongwan, joke about and read messages and talk to the fans via mobile phone. It was good fun to watch, and easy to see why its not included as part of the concert section as it would interrupt the flow of the music and lose atmosphere.

The second extra is a 10 minute montage of the preparation for the concert with rehearsals and stage practice runs followed by the preparation for his birthday celebration and entry into the army. Both this and the 1010 radio have good English subtitles.

The last extra is the song ‘사이키스’ with multi-angle selection – six to be precise and was the only part that jarred with me a little simply because those working the camera moved about, wobbled, one seemed to trip and they zoomed in and out rather suddenly from time to time. Focusing went funny a few times too, but the switch between angles was smooth enough.

4/5 – certainly not a rip off and very enjoyable addition to any collection.

concert
review
How does this article make you feel?