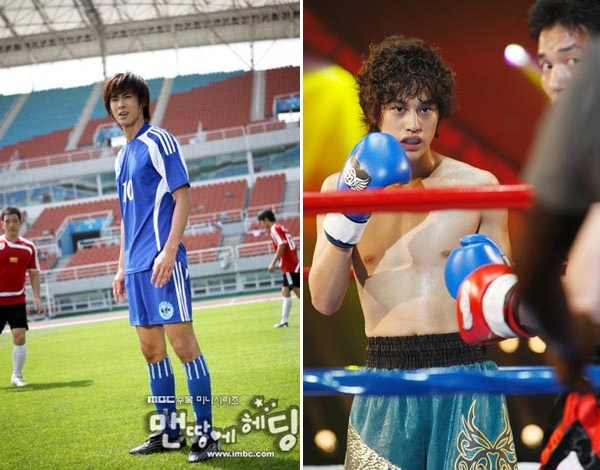 Sports Dramas Struggle to Stay in the Game

2009 was supposed to be the year of the sports drama revival, and it
has had its share of sports-themed series, with at least another still
to come. Unfortunately, they’ve all tanked.

The two currently struggling on the air are SBS’s fighting drama Dream, which has settled around the 4% mark for the bulk of its run, and MBC’s soccer series Heading to the Ground,
which kicked off with a 7.2%, which dropped to an inauspicious 5.6% for
its second episode and heads into its second week today.

Sure, one can point to Dream’s stiff competition (Queen Seon-deok), but the response is disappointing given that both these shows were buzz shows, promoted heavily for its pretty faces (Kim Bum, Sohn Dam-bi, U-Know Yunho, Go Ara). Heading
was hoping to do better with its soccer theme (Koreans love them some
soccer) and the attention being paid to Yunho’s acting debut.

Earlier in the year, Triple hovered in the 6%-7% range throughout its run despite a national skating fervor roused by Kim Yuna’s
phenomenal performances and wins in the past year. On top of that, it
had a much-regarded director and name cast (but meandering writing).
And Strike Love performed the best of these, yet was still yanked by MBC and cut early despite a ratings high of 10.6%.

So why are sports dramas faltering so?

This article by Sports Chosun says:

This situation is the diametric opposite of sports films like [ski jumping themed] Take off and [weightlifting movie] Lifting King Kong, which brought in incredible numbers at cinemas and drew much popularity.

One industry source says, “These sports-themed films that emphasize
the human spirit appeal to the fans’ emotional sensibilities and gain
strong popularity, but dramas focus not on the emotion of the sport,
but on the love lives of its lead characters, and they haven’t drawn
the interest that the films have. Also, in sports films, the actors
have plenty of time to research and prepare their characters, as well
as time to film. However, sports dramas are always racing to film on
time and it’s unavoidable that the actors playing athletes are unable
to fully act the part.”

Meanwhile, another article by Newsen points to the case of 1994’s basketball kdrama The Last Match [마지막 승부], which starred a young Jang Dong-gun and Shim Eun-ha.
It was extremely popular and pretty much established the sports kdrama
genre, though no drama since has been able to capture what made that
one such a success.

At the time, The Last Match
coincided with the popularity of university basketball, of which Yonsei
and Koryo Universities were at the top, as well discovering fresh faces
in Shim Eun-ha, whom we cannot see acting these days, and Jang
Dong-gun, who became a top star. However, none of the sports dramas to
follow have had high ratings to match it. Both MBC’s hockey-related Icing and SBS’s boxing series Punch were unsuccessful, and for a while, the sports drama trend cooled. Of course, MBC’s Bottom of the 9th with 2 Outs
included sports, but it wasn’t so much about sports as it merely used
baseball as a theme and featured a character who was an athlete. PD Lee
Yoon-jung’s eight-episode MBC drama Taereung National Village
was a well-acted and praised drama that told the stories of
national-level athletes, but on the ratings front it wasn’t able to
earn high marks.

Not to mention that sports by nature are riveting in their excitement
and suspense, qualities that are difficult to maintain over the course
of 16 (or more) episodes: “It wouldn’t be an exaggeration to say that
from the starting point, sports dramas inevitably face much more
difficulties in succeeding compared to general dramas.”

Heading To The Ground
How does this article make you feel?