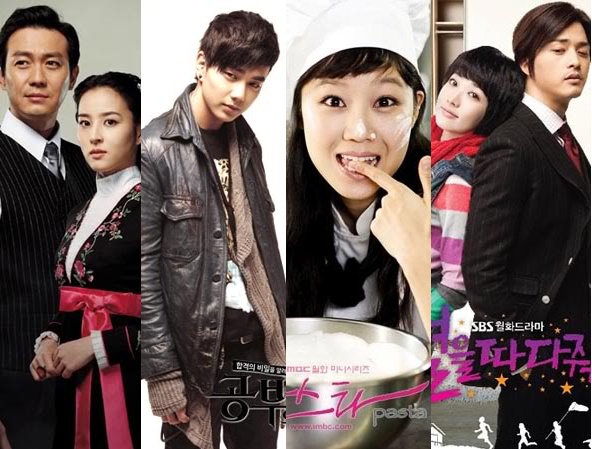 As I’ve been saying recently (I sound like a broken record, I know),
today saw the rare circumstance of four new drama series all premiering
on the same night. There’s a lot of interest to see which one(s) will
emerge victorious, but so far there’s no clear winner, as the numbers
came out more or less even.

I usually use TNS Media numbers, which put God of Study on top with a 15.1%, followed closely by Jejoongwon with 14.9%, then Pasta with 12.2%. However, AGB Nielsen numbers (which are usually pretty similar) flip the top two, giving Jejoongwon the edge with 15.1%, then God of Study and Pasta almost even at 13.4% and 13.3%, respectively. In the earlier hour, Wish Upon a Star brought in 11%, which was a 1% increase from the premiere of its predecessor, Angel’s Temptation.

I had a hard time deciding which drama to see (and possibly recap)
first, and I know I won’t be able to recap them all even if I wanted
to. So rather than pick one arbitrarily, I managed to watch all four
premiere episodes, and have come up with my first impressions on each.

I fired up God of Study first, thinking it would be the easiest to watch and recap. I wasn’t necessarily excited about this drama, but I was curious to see how it would handle the high school setting and obvious Boys Before Flowers comparisons.

Kim Su-ro is a lawyer who is brought in to Byungmun
High School to consult with its board chair. The school is affiliated
with the Byungmun corporation, whose future is shaky at present,
meaning that the school may be shut down. Kim Su-ro’s lawyer character
has painful memories of being a student at the school and would like
nothing more than to help that happen. Bae Doo-na is
a well-meaning English teacher who fears that closing the school would
be disaster for these kids, who are already faring so poorly.

Surprisingly, my first thought was that I was bored. The setup
wasn’t particularly striking, with the rowdy kids sleeping through
classes and showing a general disinterest in learning. I thought Bae
Doo-na — acknowledged as one of the top actresses of her generation —
overacted. And I was disappointed to have been told Yoo Seung-ho
would be this badass rebel, only to see that his goodness is pretty
apparent on the surface. (Not that I wanted him to be a horrible
person, but it seemed like the character wasn’t at all what we’d been
told to expect. I did like his acting and he has a lot of presence —
and it’s nice to see him playing something other than a king! — so
there is that.)

However, this drama grew on me a lot over the hour, and perhaps I
have my own expectations to blame for the initial surprise. Nobody said
this was going to be Boys Before Flowers Redux — it was my
assumption based on the descriptions, the casting of Kim Su-ro (who
does comedy so well), the hip teen cast, and the KBS ties. But this is
nothing at all like Boys Before Flowers — it’s not even a
comedy. I was expecting light trendy stuff, and instead what we get is
much more serious in tone. It actually reminded me a lot of American
teen dramas — not over-the-top Gossip Girl or campy One Tree Hill
but more toned-down, straight drama fare. I’ve thought that it’s too
bad there weren’t more shows like those lower-budget youth dramas (such
as those produced by EBS or aired outside of prime time), but upgraded
with higher production values. So this fulfills that wish.

The narrative heaviness turned me off at first, but as we got to
know more of the characters, I warmed to it. I do think they’re laying
on the serious drama vibe too thick (especially with Kim Su-ro) and
there are scenes that drag. Part of the slowness of the episode is
because it takes some time to establish each of the characters, and
we’ve got a good number of them — five students, plus the adults. What
I hope this drama does is take realistic characters and bring them
together with good chemistry, because the story itself is low-key and
simple. We aren’t going to get exciting location shoots, super-dramatic
plot twists, or over-the-top villains like in Boys Before Flowers, so the fate of the show rests on the relationship dynamics. Thankfully, most of the cast can act pretty well.

I’m not hooked on God of Study and I think it’s the slowest
of the four to settle into its groove, but there’s something
interesting about the vibe that has me intrigued.

Pasta surprised me by being better than I’d
expected. (Granted, I didn’t really know what to expect.) The
restaurant setting has drawn a lot of pre-show comparisons to other
food-themed series like My Name Is Kim Sam-soon, Gourmet, and Coffee Prince, but that’s pretty flimsy basis for comparison.

Gong Hyo-jin is exceedingly cute as an assistant in the kitchen, but what’s even better is that she has great chemistry with Lee Seon-kyun.
They have one of the more adorable meet-cutes I’ve seen in a while, and
I won’t ruin the fun by giving it away, but let’s just say that the
situation is amusing but it’s their banter that makes the scene sizzle.
The credit for that has got to go to Lee Seon-kyun (as he does most of
the bantering), and GODDAMN he has never been so sexy. Y’all know that
I have loved this man for a while now, but even so, this is the most
charismatic I’ve ever seen him. Wow.

Even before the premiere, he was drawing a lot of comparisons to “Kang-mae,” aka Kim Myung-min in Beethoven Virus.
But I’ll beg to differ. Kang-mae was entertainingly caustic, but Lee
Seon-kyun’s character isn’t mean 100% of the time. He can change from
volatile and scary to very suave. He knows how to be charming — he just
doesn’t use that charm while he’s working in the kitchen. The dismay
when he realizes that the girl he’s been flirting with is his employee
is hilarious, and it affords us the chance to see him go hot-and-cold
with her.

Pasta has a brisk, refreshing pace and a light tone that is
amusing without being jokey. There’s humor, but it’s not a drama that
hinges on comedy like a Hong Sisters piece.

The two leads are fabulous together, and the music is also great; the soundtrack sounds somewhat Coffee Prince-like, but less twee. Maybe more indie-rock than indie-pop. Of all the shows, Pasta is the one that won me over most. I’ll be watching the next episode for sure.

Jejoongwon is a very competent, well-produced, beautiful-to-look-at historical drama that will probably do well. It stars Park Yong-woo
as a young man from a dirt-poor background who works as a butcher. One
day, he is delivering beef to a fancy party, where one of the party goers collapses. A famed Japanese doctor is in attendance and
brings out his medical kit to sew up the guest’s open wound, and Park
Yong-woo is transfixed. He has heard of this growing Western medicine
movement and thinks it’s exciting.

His beloved mother is ailing (of consumption, it looks like), and
his uneducated father spends their hard-earned money on a shaman to
chase away the ghosts. He, however, insists on taking her to the
hospital for modern treatment, but doesn’t have enough to pay the bills
and is forced to take desperate measures to find enough money.
Throughout the episode, we see him coming up against societal
prejudices because of his low status, which will likely become a major
theme.

Meanwhile, Yeon Jung-hoon is a nobleman’s son with
a growing interest in Western medicine, who spends study time poring
over anatomy texts. He has a flirtatious relationship with Han Hye-jin, the daughter of a powerful nobleman who cultivates relationships with Westerners.

Jejoongwon has a nice, pleasantly airy feel in its lighter
moments and the acting is solid from both leading men. (Unfortunately,
I have a bit of a mental block with Han Hye-jin, who bothers me here.
It’s nothing to do with her acting; it’s her vibe that sometimes irks
me.) The scenes with the aristocracy feel lighter than what we’d expect
of the writer of White Tower, but we’re still only in the first episode.

I enjoyed this premiere and found it easy to watch, but rather
unchallenging on the whole. There are aspects about this drama that
really appeal to me, such as the juxtaposition of Western and classical
Korean elements in this time of rapid change (we start in 1884).
However, I sorta feel like I’ve seen this conflict played out dozens of
times before — Park Yong-woo will end up being the medical genius with
a gift for surgery, despite his humble beginnings. Yeon Jung-hoon has
everything going for him — education, wealth, background — and he is
skilled, but not brilliant. Naturally, the two will both fall for Han
Hye-jin.

Jejoongwon will probably be a solid choice to watch, but
I’m not diving in yet because there are so many offerings coming to us
at once. I’m in the mood for something fresh, or challenging —
hopefully both. Jejoongwon may have to wait until the schedule clears…

WISH UPON A STAR (SBS)

Frankly, Wish Upon a Star was my least-anticipated
of the bunch because nothing really stood out about it. It’s built on a
standard romantic conflict (klutzy girl melts icy heart of mean, hottie
professional man) and the actors, while likable, are known more for
their looks than their talent.

I was surprised the most, then, with Wish Upon a Star’s bright, cheerful tone and particularly with leading lady Choi Jung-won.
She has gotten criticism in the past for being just another pretty
face, but she’s cute in this — maybe she should have done more romantic
comedies.

Choi’s Pal-gang character is the eldest of a brood of adopted kids
that her soft-hearted parents, who are still ridiculously in love, have
taken in. She is frivolous and silly, and harbors a crush on the
company’s lawyer (Kim Ji-hoon). She’s determined to
make him fall for her, and then she’ll marry him and live happily ever
after! She doesn’t care that he’s known to be a heartless bastard, as
his younger brother (Shin Dong-wook) cheerfully warns.

I suspect that Pal-gang character may be a love-her-or-hate-her
type; she can be pretty foolish and selfish. I happen to find her
appealing — plus, you know she’s going to be in for a rude awakening
soon — but as with many romantic comedies, if you don’t like the lead
couple, you probably won’t like the drama as a whole. As for Kim
Ji-hoon, I like that he’s actually cold rather than misunderstood, and
he’s pretty sexy here.

One the things I’m wary about is that there’s a subplot that I
suspect will take up more time than it should and drag down the
breeziness of Pal-gang’s plotlines. It features a power struggle to
claim a company’s ruling rights — an elderly chaebol chairman intends
to use all his money to build a large free hospital, and asks
Pal-gang’s good-hearted father to run it. However, the chairman’s
long-suffering son feels like he deserves to run the company, and may
have something to do with the car crash that kills Pal-gang’s parents.

This is also not going to be a challenging drama, and because I have
seen this plot done so many times before, this drama’s appeal will rest
on the characters’ charm. This is the most aggressively comedic drama
of the four, and also probably the most conventional. It feels like a
good-natured family show, but with a faster pace. It could go either
way, in my book, so I’ll keep an eye on it to see if it stays fun or
gets bogged down with the nefarious plot.

God Of Study
Pasta
Star In My Heart
miscellaneous
How does this article make you feel?