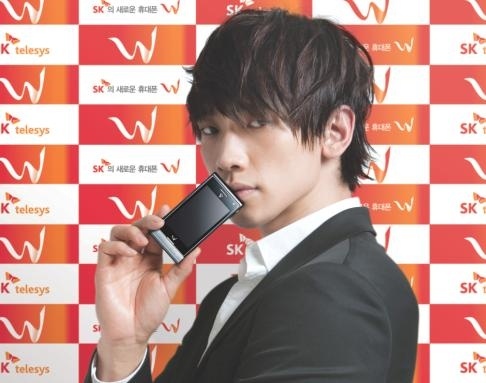 Album: Rain special album “Back To The Basic” Track 1 Purchase this album
Watch: MV Live Performance
Comment: As expected, Rain moves up to No. 1 this week with “Love Song”. Rain is returning to the k-pop scene and releasing a new special album “Back To The Basic”. The meaning behind the title is that despite being in the music business for eight years, his heart and effort in it is like that of a rookie artist. Many anticipate his new work which includes a photo shoot that equally captured attention from fans and non-fans alike. The title song “Love Song” already tops many charts upon its release. Popular actress Han Ye Sul stars with Rain in this song’s MV.

Album: Lee Hyori Vol. 4 Track 3 Purchase this album
Watch: MV Live Performance
Comment: The queen of k-pop, Lee Hyori has returned this year with her fourth studio album, “H-Logic”. Known for setting trends as well as being a pop icon, Hyori has returned after two years with a “well-made” album consisting of 14 new tracks. H-Logic is supposed to consist of “real sound” as it was produced by composer Ryan Jhun of Marcan Entertainment, known for working in New York, and Bahnus who has made his name known in Europe as well as the United States. The two have worked in composition as well as making their own sounds with instruments. The title track “Chitty Chitty Bang Bang” is written by none other than the singer herself, as Hyori reveals her songwriting talent for the first time. This week it moves up five spots to No. 2. When the album sales score takes into account next week, this song will be challenging Rain for the top spot. This song also just won the Inky Gayo Mutizen award.

Album: Secret 1st mini-album “Secret Time” Track 2 Purchase this album
Watch: MV Live Performance
Comment: Undaunted by all the superstar competitors surrounding them, Secret moves up another two spots to No. 3 with “Magic”. Perhaps overlooked last year with so many strong girl groups debuting, Secret (consisting of Jeon Hyo Seong, Han Seon Hwa, Song Ji Eun, and Jing Geo) still impressed many fans with their debut song “I Want You Back”. Since then member Song Ji Eun has released a solo digital single duet with Hwan Hee, and also performed with Untouchable on their recent hit “Living In The Heart”. Now Secret releases their first mini album, “Secret Time”. The title track is “Magic” which has lively beats and was composed by Sinsadong Tiger, Kang Ji Won, and Kim Ki Bum. This will definitely be their breakthrough hit and puts Secret on the map with already an amazing core of girl groups.

Music + Lyrics: Bang Shi Hyuk
Album: 2AM mini-album (repackaged version) Track 2 Purchase this album
Watch: MV MV Part 2 Live Performance
Comment: This is the title track of 2AM’s first repackaged studio album. It is a dance song about a man who refuses to give up on the woman he loves. The music video shows the 2AM members as a club DJ, ice hockey player, tough biker and basketball player. (credits to Arirang TV – Pops In Seoul)

Music: Kim Tae Hyun / Lyrics: Kim Hee Sun
Album: After School 3rd single Track 2 Purchase this album
Watch: MV Live Performance
Comment: After School’s “Bang!” fell three spots to No. 6. “Bang!” was composed and penned by Kim Tae Hyeon and Kim Hee Seon respectively. This song was originally going to be a follow up single on their previous mini album, but was saved up for later to upgrade it. The song uses drum sounds as its backbone with powerful vocals to accompany it.

Music + Lyrics: Lee Juck
Album: Jung In mini-album “Jung In From Andromeda” Track 3 Purchase this album
Watch: MV Live Performance
Comment: Jung In’s first solo hit “Hate You” is returning to the top 10 for a second stint. Fans might have heard of Jung In featured in many Lee Ssang’s songs in the past. The former lead singer of R&B group G.Fla finally have the stage all by herself this time with her first mini-album “Jung In From Andromeda”. Her talent is highly praised by industry insiders and her unique voice is perfect for R&B songs. “Hate You” is written by Panic’s Lee Juck.

Album: Cho Young Soo All Star Vol. 2.5 Track 1
Watch: MV
Comment: Also returning to the top 10 is MC Mong’s “Bubble Love”. MC Mong, who is largely responsible for bringing hip-hop style ballads to k-pop with many great past hits like “A Letter Written To You”, “I Love U Oh Thank You” etc., is teaming up with top songwriter Cho Young Soo and the vocal of Seo In Young for his latest hit “Bubble Love”. This song is part of Cho Young Soo’s last “All Star” series (Vol. 2.5).

Album: Epik High Special Album “Epilouge” Track 2 Purchase this album
Watch: MV Live Performance
Comment: Title song of Epik High’s 11th studio album, “Epilogue.” The music and rhythm that resemble a race come together with the group’s literary lyrics, creating much emotion. The song encourages everyone who feels left out to race towards their dreams. (credits to Arirang TV – Pops In Seoul)

Music: Han Jae Ho, Kim Seung Soo / Lyrics: Song Soo Yoon
Album: Kara mini-album Vol. 3 Track 2 Purchase this album
Watch: MV Live Performance
Comment: This is the title track of Kara’s 3rd mini-album. It is a dance pop number with an extravagant hip-hop beat and stimulating synth sounds. It has intense and refreshing sounds and is performed with the members’ impressive voices. The dynamic style of the song created through tension and relaxation fits the image of Lupin, who is known as the master of transformation. (credits to Arirang TV – Pops In Seoul)

Music + Lyrics: Shin Sa Dong Tiger, Lee Sang Ho
Album: Beast mini-album Vol. 2 Track 2 Purchase this album
Watch: MV Live Performance
Comment: This is the title track of Beast’s second mini-album, “Shock of the New Era.” A synth segment reminiscent of a heavy metal guitar riff mixes well with a brief but heavy and fun rhythm. Instead of being a dynamic song with a strong beat, the sad lyrics give the song a lyrical vibe. (credits to Arirang TV – Pops In Seoul)

Album: Gil Hak Mi 1st mini-album Track 3 Purchase this album
Watch: MV Live Performance
Comment: Yet another graduate from Super Star K, the Korean version of American Idol, making her debut. Gil Hak Mi is being labeled as Korea’s Lady Gaga. Her debut song is “Super Soul”. As the song title impliee, it is of R&B, hip hop sounds and electronica pop. Top preoducer Park Geun Taek and Rollercoaster’s Jinu are the masterminds behind this song. It moves up another three spots to No. 15 this week.

Music + Lyrics: Park Jin Young
Album: 2PM single Vol. 3 “Don’t Stop, Can’t Stop” Track 2 Purchase this album
Watch: MV Live Performance
Comment: Despite going through a roller coaster year in 2009 with many ups and downs, 2PM was clearly the most popular k-pop artist in 2009 by a landslide according to our chart calculations. The first few months of 2010 still hasn’t been kind to the group as they have to deal with the departure of former leader Jaebum. Now officially a 6-membered group, 2PM is back with their 3rd single album titled “Don’t Stop, Can’t Stop”. Once again, Park Jin Young produced their latest single that shows the more deeper and mature musical side. The title track, “Without U” is about how a man is hurt by a woman’s lies and betrayal. To express the emotion of hurt in a break up, a piano melody is repeated in the song. You will be able to see how the members have changed into a more mature, modern and chic without forgetting to show their ‘2PM style’ in music. It is our highest debut this week at No. 18.

Album: B.cruz digital single “Giants Love Song” Track 1
Listen To: Full Song (thanks to Mardi09 for uploading)
Comment: “Giants Love Song,” which was composed and penned by singer-songwriter B.Cruz (who was featured in singer LEN’s song “Baby Love”), is about how the Giants baseball team reminds one about their childhood as well as his deceased father who had introduced him to the sport. It is a mainstream style rock song. (credits to motoway065 for translations)

Album: Wax Vol. 2 (2001) Track 4
Watch: MV Vol. 1 MV Vol. 2 Live Performance
Comment: Wax (Real Name: Cho Hye Ri) is a female solo singer known for both her ballads and her up-tempo songs. During the era when she debuted, many singers focus on one genre of music, but Wax was able to show her multi-talent doing both dance and slow tempo songs. Originally the lead singer of rock group DOG, Wax made her solo debut in 2000 with a remake of Cyndi Lauper’s “She Bop” titled “Oppa”. She got her big break in 2001 when the title song “Fixing My Makeup” of her 2nd album became a huge hit thanks to a movie-like MV starring actress Shin Eun Kyung. “Fixing My Makeup” went to No. 1 on many music charts and was one of the most popular songs in 2001. Today Wax is still very active and her songs frequently appears on the top 20.

Sources of the chart

thanks to Mardi09 and ~S2~ for helping on this week’s internet chart researches.