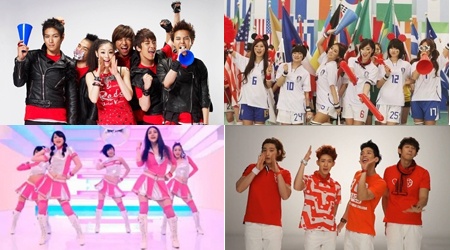 In the weeks leading up to the start of the World Cup, K-Pop groups have been showering the South Korean Team with a ton of support, and it seemed to help: the team came away with a 2-0 win against Greece on June 12th and a tie with Nigeria on June 22nd. Despite losing to Argentina, the team came away with enough to advance into the round of sixteen.

The battle isn’t over yet — sing along with your favorite Korean pop stars again and cheer on the South Korean Team tomorrow when they take on Uruguay! If they defeat Uruguay, the team moves on to play the winner of the USA vs. Ghana match. All the World Cup related songs are posted below, so start singing and cheering NOW:

On April 16, new girl group HaM released “We Are One”. It is from the “The Shouts of Reds. United Korea” which was released on March 8, and is to be the theme song for the team.

On May 3, KARA released their music video of “We’re With You” to cheer on the national team.

Also on May 3, T-Ara released their video for “We Are The One”.

2AM’s world cup song is titled No.1 and is composed by Bang Shi Hyuk (방시혁), the same composer for I Was Wrong (잘못했어), Can’t Let You Go Even If I Die (죽어도 못보내) and Baek Ji Young’s (백지영) My Ear’s Candy (내 귀 에 캔디). The song will be released on May 20 and The Official World Cup Album will be released May 31. EDIT: MV Released

On May 17, Super Junior released a teaser for their World Cup song “Victory Korea”. It is also set for a May 20 release. Edit:The music video has been released.