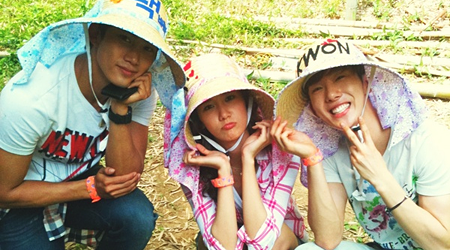 The love-line between Taecyeon and Yoona continues on Family Outing 2 this week.

On SBS’s “Family Outing 2” today, Brown Eyed Girls’ Gain made a guest appearance on the show. The love-lines between Gain and Jokwon as well as Yoona and Taecyeon were the highlights of the show.

With the insistence of the other Family Outing members, Gain and Jokwon took a walk in the Damyang Bamboo Park. Taecyeon and Yoona, who both received great attention from the Family members from last week’s episode, continued to show off their love-line on the show with Taecyeon saying to Yoona, “To me, you are the best bamboo shoot.”

During the balloon-bursting competition between Kim Heechul and Yoona, Yoona had decided to take revenge on Heechul for calling her a grandmother from the previous episode. She told Heechul during the match, “If you make fun of me one more time, you are dead.” With that, the two got into a rough match; the objective to pop the balloon tied behind their competitor’s back. Seeing Yoona in distress, the Family Outing members told Taecyeon to help Yoona. Taecyeon then stepped in to help burst Heechul’s balloon.

Because he was showered with praise by the members, Taecyeon became shy and even turned red up to his ears.

Meanwhile, the show has been recently criticized for the overemphasis of the Taecyeon and Yoona love-line in the previous episode. What do you guys think? Is it over-the-top?

Family Outing
Taecyeon
YoonA
How does this article make you feel?