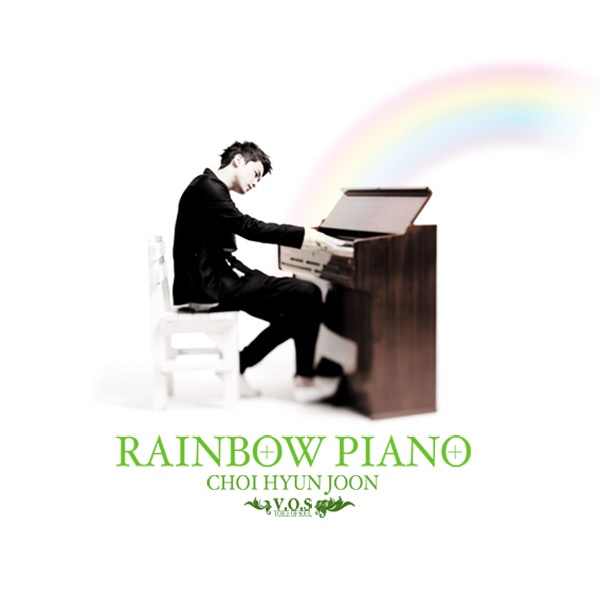 Singer-songwriter Choi Hyun Joon of the R&B group V.O.S. debuts with his first ever solo mini-album (EP) entitled “Rainbow Piano”. In addition to music, this album also comes with a 120 page photobook of the singer as a treat for fans.

The album starts off with a very sweet but short piano intro called “Melody”. Following that is the second track, “니 목소리가 들려 (I Hear Your Voice)”. On this song, CHJ employs the use of the piano, which is an integral part of the overall sound on the whole EP. The track sounds worthy enough to be an OST song for a drama.

The title track , “너없으면죽어 (If You Die)” is a power ballad composed by Cho Young Soo. The music video features Choi Hyun Joon walking the streets and taking part in the photoshoot for the album’s photobook. The song itself starts off sounding like a fairly average ballad, but is chalk full of emotion once the instrumental progresses. Judging by the effort that CHJ puts in his vocals, he is able to hit all the right notes and ranges on this song. The piano piece used in the instrumental also adds an extra touch to what might’ve been a fairly standard ballad.

CHJ really puts his voice to use on the fully orchestral track, “끝 (End)”. In fact, this sounds just as good, if not even better than the title song.

Interestingly enough, the album closes out with a non-ballad song. “Luv with U (feat. Baby J)” is a standout collaboration with Jewelry’s idol rapper who lays down a strong verse to compliment CHJ’s vocals. Together, the two establish a fine acoustic R&B number with some hip-hop flavor courtesy of Baby J’s sexy rapping voice. Listeners who want to take a break from the slow ballads will enjoy hearing this upbeat track to close out the album.

V.O.S. fans will like what this mini-album has to offer. Outside of the established fanbase, ‘Rainbow Piano’ will appeal to everyone else as a solid debut. Even if the bonus photobook does provide an extra incentive for female fans to purchase the album. With that being said, CHJ’s solo debut is worth checking out.

Choi Hyun Joon
V.O.S.
miscellaneous
How does this article make you feel?