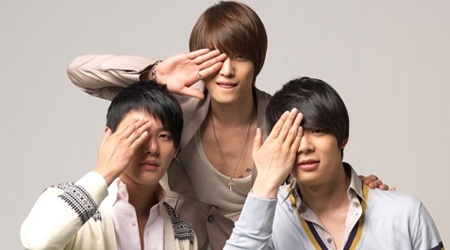 There has been great concern in Korea after news went out that Dong Bang Shin Ki trio Micky YooChun, Hero JaeJoong and Xiah JunSu had left their Japanese agency.

Even though this is for the trio’s Japanese activities, there has been great interest coming from Korea’s side as well. This is because currently we are looking at the ‘new hallyu’ by singers who are promoting in Japan currently like Big Bang, Supernova, KARA, So Nyeo Shi Dae etc.

In fact, the chance of success to be achieved by the girlgroups in the Japanese music scene is said to be high. At the same time, many of these singers’ local agencies are contacting Japanese agencies to work together for these group’s Japanese promotions. With this news, there have been many eyebrows raised from officials in the Korean music industry.

An official from the music scene commented, “Dong Bang Shin Ki is the pillar and the co-existence to K-pop in Japan. Even though they have not been very active since last year, we cannot underestimate the power that comes with the name in Japan. It is not exaggerating to say that the K-pop ‘new hallyu’ are made by Dong Bang Shin Ki. There are worries that with the 3 leaving the Japanese music scene, it will be like cold wind amidst the hot fever of K-pop in Japan.”

Meanwhile, here’s the translation of AVEX’s announcement on 16th Sep:

Suspension of JUNSU/JEJUNG/YUCHUN’s Activities in Japan

We would like to inform you that the Japanese activities of JUNSU/JEJUNG/YUCHUN, exclusive artists of Avex Entertainment Inc. (100% subsidiary of our company, head office in Minato district, Tokyo), will be suspended for the time being.

This is with regards to the reports that the representative of JUNSU/JEJUNG/YUCHUN’s current Korean management agency, CJeS Entertainment Co., Ltd. Inc., whose father holds a high position in the mafia. The said representative has used his father’s strength to blackmail artists and has served a term in prison, under charges of duress. We have therefore conducted a research for the facts.

According to the results, the relations with the mafia are unclear. However, all the other reports as written above have been proven to be true.

Our company places great importance in compliance and business policy in observing corporate ethics. We have decided to pause the management of their activities until these problems have been solved.

We highly regret that we have caused the fans that are supporting JUNSU/JEJUNG/YUCHUN great worry concerning the reports mentioned. Moreover, we appreciate your kind understanding to our company’s decision as above.

Concerning the product releases and the services currently being provided, there will be no changes made. Additionally, there is no change to the exclusive contract of Tohoshinki (5 members), whose managed by SM Entertainment.

As we have consistently stated, we will, with all our might, give our support, so that Tohoshinki’s activities can be resumed.

Junsu
How does this article make you feel?