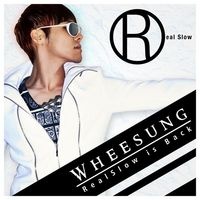 Artist of the week – Wheesung

BIOGRAPHY
For this week, Soompi’s featured artist is the multi-talented Wheesung. He is regarded as one of the best male vocalists in Korea now, but before his debut he was just a name without a face or a voice to match. It all changed knowing that such stars like Seo Tai Ji and Shin Sung Hoon had nothing but praises for this unknown vocalist. So, in a way, Wheesung was already a star before he became a star.

He started his career in 1997 as a member of a back dancing team ING, but was later discovered by a promoter to be a part a four-piece boy band A4. The band, which consisted four Korean Americans, had a hit called “Forgiving”. They didn’t last long as the music A4 pursued was too Americanized with heavy influences of Hip-pop and Reggae, something the music fans were not accustomed to at that time. Consequently, his first run as a performer fizzled out after a short time with A4 and he had become ‘invisible’ once again.

This was an opportunity for him as he acknowledged his weaker side, his vocals, which led him to spend the next two years concentrating on shaping and perfecting his vocal skills. The result was a re-vamped version of Wheesung with a unique voice color that sounds amazing. After a while, R&B, Soul and Hip-pop became more accepted by fans, so it was just the right timing for him to have another go at the music scene with his favorite genres.

“A performer without a face” was the catchphrase that followed him until he made his second debut in 2002 with his album, “Like a movie”. This was largely due to the fact that his talent had been recognized by the people in music industry before he became known by the public.

The track “Why can’t it be…?” soon swept the nation and mesmerized people with his unique voice color. His delivery of emotions was more than enough to let people wanting him more.

As his idol, Stevie Wonder, his musical roots lie in R&B and Soul. By combining different influences, ambiance and emotion within the music, he made songs that are close to our hearts.

Wheesung’s follow up in 2003 “It’s real” cemented his ability as a vocalist and gave him a place in the Korean music scene. The tracks “Set me free”, “I’m missing you” and “With me” demonstrated his talent flawlessly with his R&B influence. And as a member of M.Boat Entertainment, he shared the stage with the likes of Big Mama, Seven and Gummy at the “Soultrain” concert which went on to be a sold-out show of an attendance of 20,000 people.

It was a busy two years, but rest was not an option for him as he served up his 3rd album “For the moment” in October 2004. This time, camera shy Wheesung sharpened up his image and did away with the hiding and showed off his well-toned body and his face to his fans in support of his first single off the album “Incurable Disease”.

Wheesung was certainly on a roll for with both of his albums selling in the 100’s of thousands, which is rare case in this digital age.

After his contract ended with YG Entertainment in March 2006, he signed with Orange Shock. He continued to work with many producers and singers for his albums, single and also a drama soundtrack. He was also chosen by Craig David to do Asian version of his song “Insomnia” which song become instant hit once it was released.

In June 2009 he changed label to POP/UP Entertainment, and released his sixth album titled “Vocolate” three months later. He was also busy writing lyrics for other singers like Younha, G.Na, Seo In Kook and other songs that have also done well in various music charts.

He returns after ten months with a new single album, “Real Slow is Back.” It includes title track “Even Thought of Marriage” and newly arranged versions of “Rose” and “Love, That Bad Disease” – songs that were included in his sixth album. “Even Thought of Marriage” is a powerful R&B dance number composed by renowned composed Kim Do Hoon and penned by Wheesung himself. It has strong sounds backed up with the artist’s solid vocals. The song is about a man who feels sad and pathetic when a lover he even decide to marry, leaves him. He also become the first singer in Korea to have 3D screening for live concert. The VIP showcase just been held few days ago.

Artist Of The Week
Wheesung
How does this article make you feel?