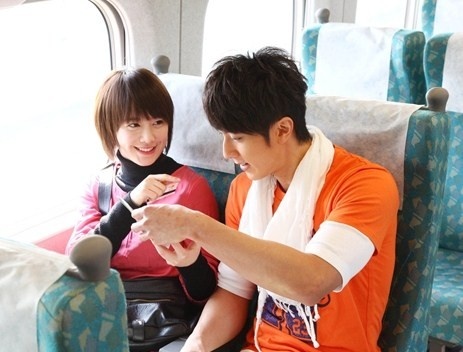 Boy’s Over Flowers star Goo Hye Sun will be starring a new drama with Taiwanese star Wu Zun. Currently, Wu Zun is commanding appearance fee equal to that of Nah Ji Sang due to the high popularity of his latest drama with Yang SeungLim called “Sunny Angel”.

Wu Zun’s commanding salary has gradually gone up since he starred in “Princess Sleeves”. His previous attempt to break into the movie industry did not do as well. As a result, he quickly returned to dramas. Now, he is set to star in “Absolutely Him” thereby firmly establishing his place as an actor. In the last 4 years, Wu Zun’s acting fee has jumped 6 times.

Wu Zun and Fahrenheit are Taiwan’s Tourism Ambassadors and has gone to Korea in March to carry out their duties and also has made a CF/Music Video called “Touch Your Heart” with Goo Hye Sun. Soon after they completed the Music Video, Goo Hye Sun has agreed to doing a project together with Wu Zun. Luckily, the Japanese manga remake of the story, “Absolutely Him”, had become available and both Wu Zun and Goo Hye Sun were been selected to be stars of the drama. However, Taiwan viewers are not that enthusiastic about Taiwan’s GTV dramas using Korean female stars as leads of their last three woo-sang-geuk/modern dramas. Taiwanese viewers have expressed their desire to develop and utilize more Taiwanese actors and actresses. However, GTV commented that foreign actresses are able to be active in international arena. GTV has said dramas cannot have such restrictions based on nationality.