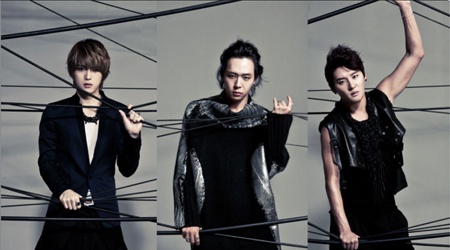 Trio JYJ announces their move to the American music scene with their debut English album “The Beginning.” The album will be released on October 12 in the U.S.

The boys (Kim Jae Joong, Park Yoo Chun, and Kim Jun Su) have teamed up with U.S. producers Kanye West and Rodney “Darkchild” Jerkins for the album which will have pop, R&B, and dance music. West, who composed the first single off the album “Ayyy Girl,” comments on the track as an “apt song” that “depicts the maneuvering of the many complicated relationships and emotions they have had in their lives and the long way they have come in order to launch this album.”

Jerkins adds his excitement to partake in JYJ’s debut album with his two compositions “Empty” and “Be My Girl”. He comments, “It’s all about the East meeting the West these days and the world is becoming a melting pot of various cultures. To have Kanye and myself champion the cause of unifying the world through the international language of music and introducing top artistes from one end of the globe to this end in America makes this a very special project to us.”

The album includes seven tracks and three remixes. Among the songs are three self-produced tracks titled “Still in Love,” “I Can Soar,” and “I Love You” by Jae Joong, Jun Su, and Yoo Chun respectively.

The Beginning is produced by Show Shop Entertainment and distributed by Warner Music worldwide. The album will be released on CD and digital formats from 12th October. There will also be a special limited edition ‘Luxury Package’ of which there are only 99,999 sets.

The first single “Ayyy Girl” will be made available on iTunes for download on October 19th.

America
debut
JYJ
How does this article make you feel?