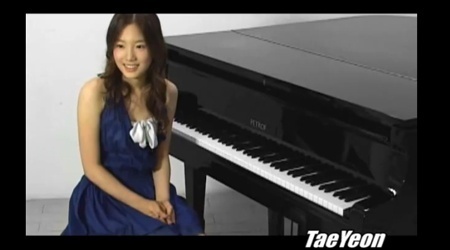 Taeyeon: "The Most Memorable Student From SM Academy"

SM Academy(Also known as Starlight Academy previously) is the academy for aspiring entertainers in K-entertainment. It is owned by SM but it is ran as a separate entity and enrolling in the academy does not give you any advantage to become an SM trainee(The academy does give its outstanding students opportunities to participate in some internal SM events like showcases).

The president of SM Academy Lee Solim, was asked who was her most memorable student over the years.

“To answer who was the most memorable student, SNSD Taeyeon was the most memorable. When Taeyeon was in 2nd year of middle school, she showed up holding her dad’s hand. Considering she’s from Jeonju and in middle school she was too young, and she had to be accompanied by her dad. Her dad ran an eyeglasses shop and he told me this. He does not plan to have her become an entertainer or a singer, he knew very well how difficult that was. And it would be tiring for him to drive her up here each Sunday so he told me to persuade her to give up if I thought she had no basic talent and it wouldn’t work out for her.

So I told him ‘Mr Kim, then we shall check out her singing’. And she sang, and well, she wasn’t that good like she is now. But her voice was clean. If she works hard she can do well, that’s what I felt. I asked Taeyeon there and she said she practices alone by singing along to songs on her computer. The child was too young I wasn’t sure how to set up her practice routines. But I asked her if she can work hard and she replied that she can work hard. So I told her dad ‘It may be hard for you but the child loves to sing, and even if I make her quit here she will continue on her own. She has gleaming eyes, she has a good voice why don’t we let her practice here for six months or a year and see how it goes.’ So her dad brought her from Jeonju every Sunday and he waited until the evening while she received the lessons then took her home. He labored liked that for a year.”

“I think a bit of a twist of fortune is needed for a person to move on to better things, at that time Taeyeon won first place in Singing Jjang category at the SM Youth Best Competition and received a contract. During the last semester, one of our instructors ‘The One’ who was the vocal trainer, featured Taeyeon in his song (You Bring Me Joy) since she worked so hard for the year and she had good voice. The song came out great and with good responses she moved on to SM. There she improved so much. She worked hard too. And she lost lot of weight. SNSD Taeyeon is the one who is most memorable.”

2nd year middle school student ‘Kim Taeyeon’ was enrolled in the Vocal Program at the Academy then in 2004 received her contract with SM. After 3 years of training she would debut officially as ‘SoNyuhShiDae’.

These are screencaps from Taeyeon’s debut interview video, and they seem to be from the SM trainee showcases that SM always teases us about but never releases. The showcase held in September 2006 had a performance from Taeyeon, she sang a cover of Onitsuka Chihiro’s Gekkou(Moonlight), this legendary performance is probably the one most requested by Ksones for SM to release.

Some accounts from people who attended the showcase in Sep 2006

“Kim Taeyeon was most moving; Sang great, danced well too”

“…And then her name was Taeyeon, she sang this song,
What I remember is she sang a song titled Moonlight
After the showcase I found out it’s originally a jpop song!
But Taeyeon sang a Korean version! Taeyeon was great as expected
I’m personally her fan.. she’s the best she’s got potential
…
And.. Hyoyeon… wow… her stage presence… the best there”

“Shindong and Choi Sooyoung were the MCs.
…
Kim Taeyeon was a trainee I did not know too well, but she impressed me a lot through this showcase. She sang solo ballad called ‘Moonlight’
Kim Taeyeon was a total star… got me surprised. She did so good..
…
At the end 11 of the girls peformed something with a title called ‘Into The New World’..
They said it was being revealed for the first time”