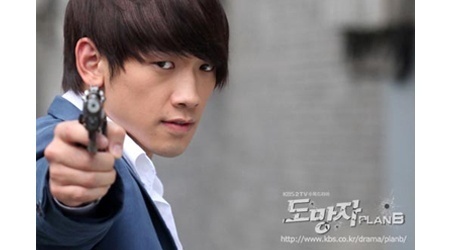 I had expected Daemul to cut into Runaway‘s ratings somewhat, but hadn’t thought it would so completely dominate. Yes, dramas tend to be the purview of the ajumma viewer, and President Go Hyun-jung is a huge draw — but surely Runaway would collect that subset of the viewership that craves testosterone, action, and speed, I thought. I’ve wondered if it would have done better as a summer series, or even on weekends a la Man Called God, but in any case it hasn’t managed to command the same action-lovin’ eyeballs as Chuno, which is what everyone was banking on.

It’s too bad; despite not loving the drama, I have fun watching Runaway, which is a harmless escapist vehicle to counter the Pomp and Drama of Daemul and the romantic sweetness of Playful Kiss. (Also: Lee Jung-jin is damn hot. Sometimes I forget to pay attention to the main point of a scene when he’s all gruff and glowery onscreen. Although, let’s be honest — the hot stuff usually IS the primary purpose of scenes in this drama.)

Rain
Runaway Plan B
How does this article make you feel?