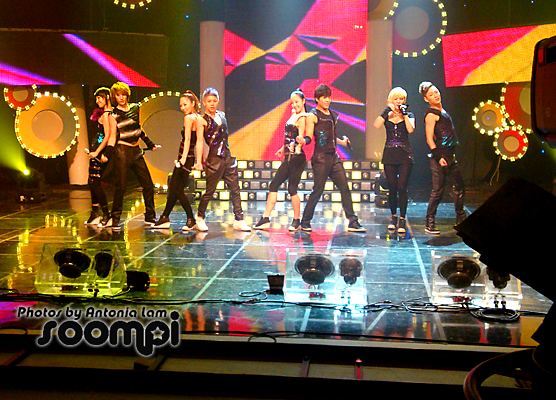 Catch the show this Sunday on the Arirang channel!

After a short meet and greet with the staff members of Arirang, we were seated at the press section. Show started promptly at 6:30PM.

The first performer had really cool back-up dancers, though the singer was dressed rather plainly (for K-pop) and then he started singing. Oh, my God. It was Outsider! He looked way more aggressive than in “Alone,” without the long hair, but seeing him sing the entire song nonstop—he was amazing. There was another singer doing the ballad-like bits, but Outsider rocked my world. He looks even better in real life.

Everyone was uber professional, very cool looking on the staff, but once the stage director called out, it was like a switch was flipped and everyone was laughing and joking, clearly coming off from the high of performing, even if the only audience was the camera, the crew, us reporters, and about fifteen lucky fangirls. Outsider was backslapping and thanking his back up dancers and on their way out, they also bowed and thanked the reporters and studio staff! It made my heart warm to realize that even as famous as he is, Outsider still remains a polite and lovely person.

(F1rst waiting to be called on stage!)

Jiggy Dogg were just as energetic as Outsider, though in a more upbeat way and the two lead singers interacted flawlessly with each other, bouncing off each other as they sang and danced. They were actually quieter when they left the stage, though in the ready room, I could also hear them thanking staffers. The girl that sang her bit there had the sexy struck on camera, but the instant her boots left the shiny stage tiles, the smile turned off, and her walk was normal.

Next band was a co-ed group, F1rst. Seeing the boys break dance live was neat, since I could hear the sound of their bodies hitting the ground and see the slight flex as they rebounded up. Everything usually looks so effortlessly on television! The archery theme in the dance was cool, too. Like Asian elves!

(This is the moment where you go “AaaAAaa~~ So that’s what they do!”)

After was Trans Fixion. It was like a Korean version of Fall Out Boy with only one member doing most the singing. The guitarists were cute in a cuddly, nerdy way, but the lead singer didn’t make my heart pound like Outsider. He has great hair, but during the guitar solo part, the singer looked bored and even stuck his fingers in his mouth for some reason! Before the filming started, the singer did a tongue click to test the sound or something.

Touch was the real draw for this session, because the fangirls on the other side of the stage completely lost it when they came on. Their stage costumes were this incredible awesome mix of haute couture and Adidas, I kid you not. Lots of the trademark blue with stripes, and combined with the earthy brown, and white shoes, Touch really stood out. I loved how one of them had on a white undershirt that resembled Sasuke’s (from the Naruto anime) when he was a genin, and he completed that look with black tights. A tall, skinny member with a bit of his bangs dyed red earned the nickname of Harry Potter look-a-like with his emo-glasses. Their dance was even better up close and live. Best of all, I got to see them perform three times since something went wrong during the initial filming of the second song.

It was adorable how they warmed up. Fluffy-haired boy with the fox-fur over one shoulder and a few others sang scales and bits of the song acapella! And before they left the studio area for the changing room, they stopped at where I was sitting, lined up, and bowed really ridiculously deep at the waist (one boy’s nose almost hit his knees!) to the elderly man next to me! All at the same time! As it turns out, the producer was watching the entire time. I was so close that I could imagine they were bowing to me and it was great.

HAM (Heart and Mind) passed Touch on their way to the stage it was totally adorkable how the members of each group bowed, smiled, and thanked each other as they walked in opposite directions. So it was a huge surprise when I saw HAM dance: major booty-shaking, people! Booty shaking that wouldn’t look out of place in a Britney Spears music video. Up close, the girls’ waist were so thin, I was afraid the violent motions would snap them in half.

The last performer I saw was a huge difference from all the dramatically costumed singers that came before her. Dressed like any other Korean woman you might see on the subway in tights, plain boots, and a knit top, hair hanging straight and unstyled, Sun Woo completely blew me away. This petite, slender girl has huuuge lungs because she sang her operatic song effortlessly. Even the watching fangirls were stunned silent at the power of her voice. Sun Woo didn’t need any fancy dance moves or lighting effects, her voice alone is enough.

On an unrelated-related note! * Unfortunately, press were only allowed to be in the second session. Suguishi’s dream of seeing U-Kiss Kevin again was crushed T-T