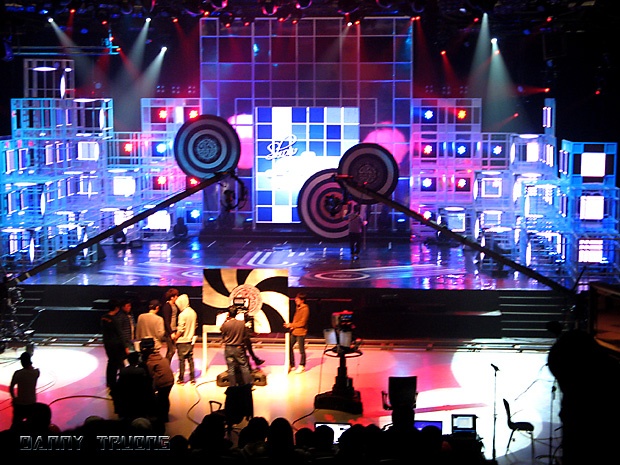 * First of all! As a note—Very good news! Found faster way to Music Core. (refer to https://www.soompi.com/news/the_music_core_experience_1092010 )Instead of exiting at exit #3, just exit at Exit 2, when you’re above ground, turn left and just walk into the park �de42 Then follow directions as before. No need to take the over pass.

It’s been 3 weeks since I last visited Music Core, and the weather have gotten a LOT colder— supposedly, so the lines were no longer outside, but inside. (It was actually quite warm today….) The green house effect indoors was totally not helping. People were sweating left and right!

Naturally, one would look for iced cold water, no? So being very thirsty and enthusiastic k-pop fans, we happened to make a pit stop at the Coffee Prince Coffee shop and guess who we saw there this time?!

Co-Ed School girls buying coffee! And honestly speaking, we failed again because we couldn’t figure out which group they were from at first—-until we actually saw the performance later on in the day. And yea, they just basically walk into a crowded coffee shop with full hair, make-up, and outfit on. It was kinda sad thinking back… They were looking around afraid that they might get attack by fans. Sorry, no fans attacked or were surprised. Everyone kinda looked at them wondering who they were and why they were there. Everyone was trying to figure out who they were. Sucks to be new groups sometimes. In either case, they have good music. I happen to be a huge fan of their music– just that when it comes to faces….well…. you know the story….. �de41

About 500 people lined up for for Girl’s Generation’s Comeback performance of Hoot. The ones who lined up for Girls Generation since 8am saw them 4 times today. You can KEEP going back in for the practice, taping, and the live performance! All the SNSD fans got pink balloons with the Korean word for “Hoot”(흦) printed on them ^^.

Actually, I did get there late….. because I had to get ready to put on my “Halloween costume”! Jessica’s OH! outfit! �de00 No autographs please!

It was really hard lining up for SNSD today since there were so many people fighting to get in. They started the first practice round at around 10am, and 2 more pre-recorded rounds at 12 and 1:30pm. The last performance of SNSD was at 4pm with the live broadcast.

If you happen to line up with the Girls Generation fans in the morning, you also saw 2am practicing as well!

It was extremely easy lining for ALL the other groups today. Almost too easy! Because there were such a HUGE turn out for Girl’s Generation, nobody was really lining up at the other groups. We got to line up with the 2PM fans with absolutely no problem. We had our albums with us, but they didn’t even check it! And again, like 2ne1 last time, they gave us an attendance card with the date we attended written on there by the Official fan club staff and signature. Very official.

The studio was PACKED FULL. So full that they had to have the fans sit on the steps!!!! Hello, fire hazard! Good thing there wasn’t a fire, or else a lot of boys and girls will get stuck in the studio— let’s just say… and burnt to a crisp!!

Speaking of getting burnt—- 2PM was the hottest today! (haha!) Ouch! ^_~<3 Not only did they put on a stunning performance of “I’ll be Back”, but the fans knew exactly when to scream out the lyrics, and what to scream out when they’re not sining. This is probably the most advance live-performance-screaming that I’ve ever witnessed. There were a lot of screaming going on. My poor ears.

The former MCs Yuri and Tiffany introduced the new MCs. They had a segment where they were standing in front of live audience. Can you spot me?! �de00

So when it was Co-ed School performance, we all *head-desked* because we realized the girls that were getting Coffee were them. Oh well, if Korean fans didn’t recognize them, then it’s ok for us right? lol. (Let’s hope this fail does not continue…).

2AM
2PM
Co-Ed School
How does this article make you feel?