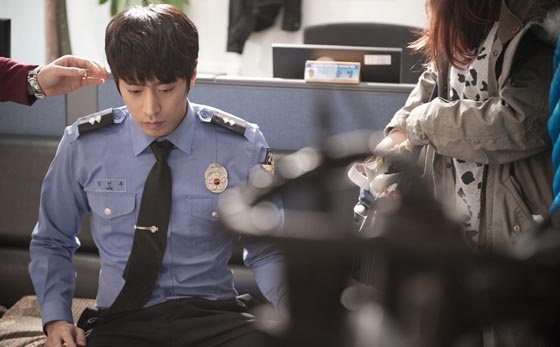 Woohoo, Eric is back! Just two weeks after his army discharge, he’s back to work on the upcoming big-budget action drama Poseidon, and here are his first stills from the production.

These photos come from his first shoot, which took place on November 9 at Taean’s Shinjin Port. He said, “This is my second time working with Kim Kang-woo, who plays my rival here, after we first acted together in the drama I Run.” (Kim Kang-woo was the lead in that show, while Eric had a supporting role.) “Along with Kim Kang-woo, who I debuted with, I will show you a more mature performance as an actor.”

Both Eric and Kim Kang-woo play members of the maritime police force who are scouted to the elite team called Poseidon, where their relationship is characterized by competitiveness even as they’re teammates.

I find Eric to be an interesting case of the singer-turned-actor, because he’s an example of a star who seems better suited for the acting career than the previous idol one. (Others I’d put in this category: Yoon Eun-hye, Yoon Kye-sang.) I do have fondness for Shinhwa, but I can’t help but cringe at a lot of Eric’s rapping. Meanwhile, onscreen he’s got a lot of charisma and some raw talent that — when channeled right — can be pretty compelling. (See: Que Sera Sera.) Badly directed, though, he can also be a bit of a mess. (See: Strongest Chil Woo.) But I’m hoping for good things, particularly with him being pitted against Kim Kang-woo.

Poseidon is planning for an early 2011 broadcast.

Eric
Poseidon
How does this article make you feel?