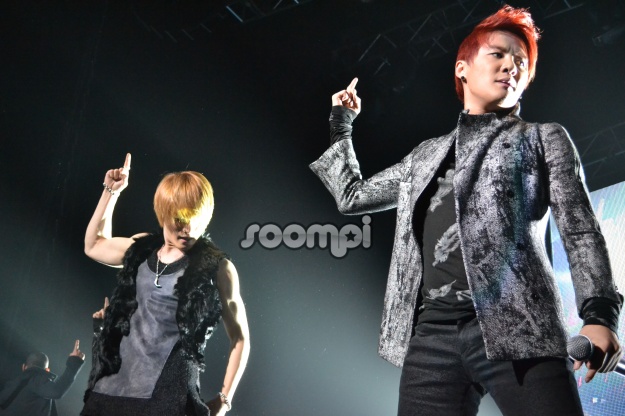 SOOMPI caught up to JYJ’s (Junsu, Yoochun, Jaejoong) showcase in New York on Friday the 12th, in order to bring you exclusive coverage of the concert. As we reported earlier, JYJ’s concert was made free for all three US stops of the tour – New York, Las Vegas, Los Angeles – due to their performing visas being denied.

Fans of JYJ started lining up as early as Thursday, but were dismissed and told to come back at 6AM on Friday. At 7PM, the time when the venue was to officially open their doors to begin seating the fans, the lines had grown to a point where it continued for several blocks, with more than 7,000 people in the line. The Hammerstein building, where the venue was taking place, had a maximum capacity of 3,400, and so in the end, more than 3,500 die-hard fans were unfortunately turned away.

With the chaos of seating both the fans with previously purchased tickets (money for tickets were refunded, but those ticket-purchasers were still guaranteed their seats) and the fans who stood in line for hours, hoping to take part in the concert on a first-come-first-serve basis. The official concert began at 8:30pm, a bit later than the scheduled time.

During the waiting period, fans already admitted into the building were constantly teased by the fake openings to the concert, including sudden flashes of lights and cameras zooming in on the entire venue. Many unique fans were captured on screen, with various banners and signs cheering on JYJ. One particular forum, OneTVXQ, gathered money in order to buy 1000 red LED lights to give out before the concert so that JYJ can see a “red ocean,” even in New York.

At 8:30, the lights suddenly went out, and fans began chanting the names of JYJ. MCs Julie Chan and Shane Yoon briefly (and dramatically) announced the beginning of the show.

After they walked off stage, three spotlights suddenly appeared, prompting even louder screams from the fans. JYJ slowly moved down a staircase-like platform, performing the beginning of “Empty.” As they moved into the actual stage, backup dancers suddenly appeared on stage, jump starting their lively choreography to the rest of the song.

After “Empty,” the boys proceeded directly to “Be the One.” The song shook up the entire Hammerstein, with the building vibrating with every beat. During the dance break of the song, Junsu took center stage and proved to the audience his dance skills.

The lights went out, and a video titled “Dear Fans…” was played, featuring the boys writing on glass windows with markers in order to show their appreciation. The third song, “Be My Girl,” came immediately after the video, and slowed down the pace. The three of them stood on stage with microphone stands, and vocally communicated their emotions to the audience. At the end of the song, a behind-the-scenes clip was played, and featured the producers talking about the entire process of making JYJ’s global debut album “The Beginning”.

The MCs walked back on stage after the video, along with JYJ, and commenced a short Q&A session with the members. The MCs revealed that they had asked fans in line for some questions to feature in the Q&A.

Below is a transcript of what went on after the three boys officially introduced themselves to the audience. Most of the Korean responses were translated by MC Julie; some lines were omitted while other lines might be a word or two off.

MC Shane: “‘The Beginning’ album is your first English album recorded here in America. Tell us how this all began.”

Yoochun: “Our first album, the beginning, starts with you guys. And now we’re able to stand on this New York stage.”

MC Shane: “Kanye West is one of the most prolific producers of our time, how was it like working with Kanye West?”

Jaejoong: (Response translated) “I was nervous at first, but Kanye was really cool and he made [us] feel very comfortable, so it was easy for [us] to get very artistic with [our] music.”

MC Shane: “You guys work so hard on your dancing and your singing and looking good, obviously, what do you do in your free time? What do you like to do for fun?”

MC Julie: “You know what I noticed? He does train a lot, but all of these guys are super ripped. Yoochun… I saw a tattoo on your back. Would you like to show us?”

Yoochun: “You want to see mine? Or Jaejoong’s?”

MC Julie: “I don’t think he thinks you guys want to see it. You want to see it? (Yoochun shows fans his back tattoo very briefly) What about your hobbies?”

MC Julie: “Besides getting tattoos.”

Yoochun: “I’m trying to get one in New York actually. I’m thinking, maybe tonight? I don’t really have any hobbies.”

MC Shane: “Alright, Yoochun. You’re in the Korean drama ‘Sungkyunkwan Scandal.’ How did you like acting, as opposed to singing or dancing? How was the acting experience?”

Yoochun: “It was really fun, but actually, I’m not that good at acting.” (Fans scream in protest)

Yoochun: “Is it okay if I say some sentences as Lee Sun Joon?”

MC Shane: “So he’s going to say some sentences as his character from the drama.”

MC Julie: “For those of you who have not seen it, it’s a period piece, so they’re speaking a very ancient form of Korean, almost like Latin.”

Yoochun: (Line translated) “I really wanted to see you.”

MC Shane: “You three have worked together for such a long time; what do you guys like about each other? What makes JYJ work so well together?”

Jaejoong: (Response translated) “My English is not that good, so I’m glad Yoochun’s with me, since his English is great.”

MC Julie: “Junsu, what do you like about your bandmates?” (pause from Junsu)

MC Shane: “Come on, there has to be something!”

MC Julie: “I like where his tattoos are, more. What are you going to get for your other tattoo? Your new tattoo from New York?”

Yoochun: “Probably…” (MC Julie: “Something symbolic of New York?”) “No. –laugh- Probably something related to my family and stuff.”

MC Shane: “This question comes from all the girls. Are you guys single?”

Junsu: (Response translated) “I don’t have [a girlfriend].”

MC Shane: “So none of them have girlfriends. Ladies, you have hope!”

MC Julie: “And their second single ‘Be My Girl.’ Hey, that could be you. Who wants to be their girl?” –Fans scream-

MC Shane: “[The first fan question] is from Sophia: [….] How do you like New York, and what’s your favorite part about New York so far?”

Jaejoong: (Response translated) “This stage right now, because I’m feeling all the love from [the fans].”

MC Julie: “Who wants to get in a taxi with them?” -Fans cheer-

MC Shane: “[…] ‘The Beginning’ was all in English. What was the hardest part of learning English, since it wasn’t your first language?”

Junsu: (Response translated) “Getting the pronunciation was the hardest part, but I had great help from the staff and the teachers, as well as Yoochun.”

MC Julie: “Can you imagine Yoochun teaching you English? How will you be able to focus?” –To Yoochun- “You have a second career!”

MC Shane: “Of you three, who here likes studying?”

MC Shane: “[…] The fans want to know: do you read all the messages sent to you on Twitter?”

Yoochun: “Honestly… I try to.”

Jaejoong: (Response translated) “I read about 50%.”

Junsu: (Response translated) “It would be a lie if I said I read all of them, but I really try my best to read as many as I can.”

After the Q&A, the members got ready to sing the only Korean song of the night: Chajatta (Found You) from the Sungkyunkwan Scandal soundtrack. With the lights dimmed, the boys poured their emotions into the song, and waved their arms in the air. OneTVXQ had also previously asked the fans to turn off their red LED lights, and to replace it with their cell phone white backgrounds for this particular song (to create a “White Ocean”), which many fans complied to do.

The energetic atmosphere returned as JYJ performed their main hit: “Ayyy Girl (Featuring Malik Yusef and Kanye West)” With red lights pulsing in the background throughout the song, the boys jumped straight into the choreography from their music video. Towards the end of the song, the members of JYJ got together in a formation and moved from one side of the stage to the other, pausing slightly at each section, making the fans of the section go crazy.

With only one song left to perform, JYJ addressed the crowd and thanked the fans for coming to their NY show and for all of their support.

Yoochun announced the next song: a remix of “Empty”, which incorporated much more techno beats. The boys were especially energetic for this song, jumping around the stage, prompting the audience on the floor to do the same. They even threw in some chest pops, which made the fans go wild. At the climax of the song, cannons shot out confetti, which covered the entire Hammerstein building. JYJ walked up the platform where they originally showed up at the beginning of the show, said a quick goodbye, and disappeared, leaving only the lingering screams of the fans.

The MCs closed out the show, and the “Ayyy Girl” music video started playing on the screen, officially bringing the showcase to an end.

Overall — JYJ’s live singing is amazing, and they added many more adlibs to their songs than on the recording. If you happen to live near Los Angeles, don’t miss out on this opportunity to see JYJ live, especially since it’s now free!

If you haven’t already, check out the soompi picture gallery for more pictures of the showcase! Also keep an eye out for a short video recap/coverage of the event later on!

Photo credits to clearlymisunderstood. Please do not redistribute, copy, or sell without our permission!