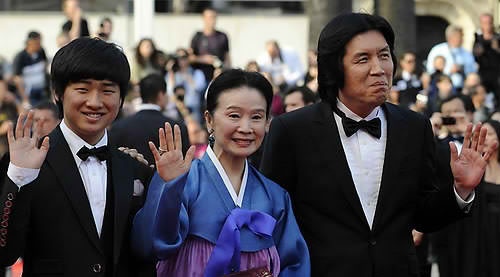 Veteran actress Yoon Jung Hee will receive the lifetime achievement award at the 34th Cairo International Film Festival, which starts November 30. In doing so, she will join the ranks of past recipients Elizabeth Taylor, Sophia Loren, and Catherine Deneuve.

Yoon, 66, will become the first Korean to win a lifetime achievement award at an international film festival. Despite being a famously prolific actress who appeared in 330 films since her debut in 1967, she retired from acting and moved to France after she married pianist Paik Kun Woo in 1976. She did not appear in any films until last year, when she starred in the movie “Poetry”. Yoon portrayed a grandmother who learns how to compose poetry. She was considered to be a strong contender for the best actress award at Cannes, but did not win. However, “Poetry” was awarded the best screenplay at that film festival, and Yoon did win the best actress award at the Daejong Film Awards on October 29.

We extend our congratulations to this beautiful and talented actress.

Yoon Jung Hee
How does this article make you feel?