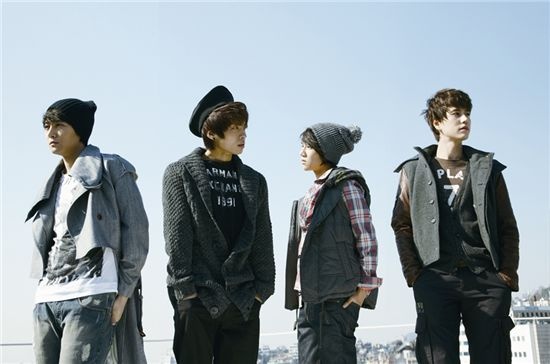 SM Entertainment announced today that four of its current singers have formed a ballad group. Super Junior’s Kyuhyun, SHINee’s Jonghyun, TRAX’s Jay, and rookie Jino have joined forces as a project group named “S.M. The Ballad”. Their first full-length album, “Longing For You”, will be released on November 26. It should feature collaborations with various singers.

Kyuhyun is one of four lead vocalists of Super Junior; he also participates in its sub-group geared toward the Chinese audience, Super Junior-M. Jonghyun debuted in 2008 as the lead vocalist of SHINee. Jay is the leader of the Korean rock duo TRAX. Jino, 18, has trained with SM for two years; S.M. The Ballad will mark his singing debut.

Jino
Jonghyun
Kyuhyun
S.M. The Ballad
TraxX
How does this article make you feel?