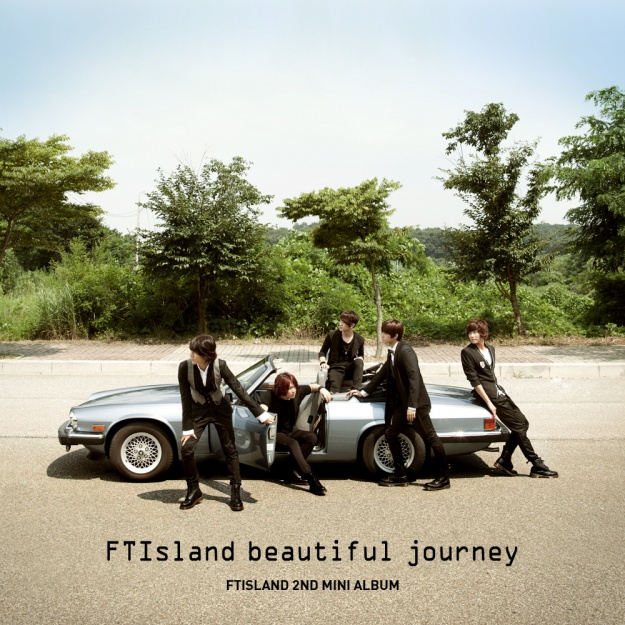 FT Island, who had been quite busy with their Japanese activities have not forgotten their fans back at home. The boys finally make a comeback after a year with their second mini album titled, “Beautiful Journey.” The new album consists of five action packed tracks, with “Love Love Love” being the title track. The album follows the concept of going on a vacation, as shown through the album jacket and the 24-page photo booklet included with the CD.

The title track is “Love Love Love,” a medium-tempo pop rock number composed by Kim Do Hun. Lee Hongki’s emotional vocals harmonize beautifully with the instrument arrangements played by his band mates. This is a strong track, well qualified to be the title track.

The album continues on with ballad number, “Calluses Being Stuck” and light pop song, “Baby Love” which were both great in terms of vocals, but not so much in terms of uniqueness. The songs were rather generic in my opinion, lacking the extra oomph to make them any special.

The album however, captured my interest once again with “Crazily, Only You.” The initial melody of the song caught my ear right away – it was haunting, yet alluring. The song then moved towards a rich rockier sound in the chorus line. The song definitely had more potential than the former two.

It seems that the boys saved the best track for last as I enjoyed their final song, “Don Quixote’s Song” most. What makes it even better is that the leader of the band, Choi Jong Hun co-composed the number, making it an even more memorable song. This upbeat pop rock number is very lively in terms of mood and the guitar sounds are very prominent. The song in terms of melody is also great and Hongki’s vocals are up to par. Fans and non-fans alike should definitely take a listen to “Don Quixote’s Song.”

Overall, I must say that the album was all but average as there was a mixture of both good and bad apples in the barrel. However, this should not deter K-pop listeners from checking it out as there are still a handful of catchy songs.