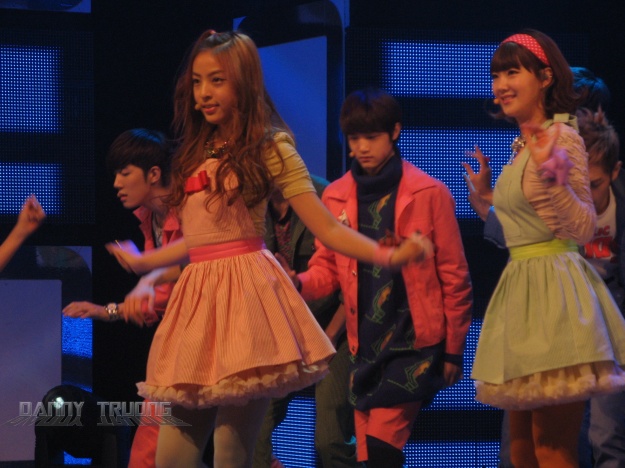 The M-Wave: In-Studio Review on November 23

It was my sixth time seeing Co-Ed School and I surely enjoyed it! The group is headed to stardom at this rate of promotion. I really wish the best for them, because their songs are so catchy.

They put a smile on my face every time I see them on stage or hear them on the streets being played on the radios here.

I really like how Girls’ Day bowed at me one by one as they left the stage. Such high respect for myself and the press! By the way, it was only and fellow Soompi writer Suguishi and I for the press at the time! Although they are “relatively unknown,” their new hot song is creating quite a stir and they already established a high rapport for themselves all throughout Korea. Their flexibility and kicking, coupled along with their unique vocals makes up a very well rounded band. The girls came out twice in the original white uniforms and later at the end of the show with a completely different costume.

F.Cuz
The manager came out and handed us both a copy of their Midnight Sun CD and the band also signed it! How cool indeed. This CD is actually a not-4-sale copy and has no barcode. The group put on a solid performance. There was this jacket that ___ was wearing and it looked 95% like my friend’s jacket here.

Talk with Kevin and Alexander!

After the show was over, a fan was waiting for Kevin and Alexander to leave. She was the one lucky fan to get a picture with them! Yes, just one. It was not us. In the hallway, we were able to catch Kevin and Alexander leaving and we said hi to each other… and etc. Suguishi just had to be the bad noona and shook hands with Alexander who was carrying some ten boxes of cakes/presents (which was all for Kevin! His birthday!) The awkward backward left-hand-shake was too funny.

Suguishi says: ^^ Really excited that Kevin reached out to shake my hand (our hands). Wasn’t expecting that ^_^… He’s a very sweet boy :D… As a matter of fact, both Alexander and Kevin are very sweet! ^^

The other groups and singers were also kind and bowed to us as they left the stage. It’s too bad they were too new to me, or I could chime in who everyone was. VNT, Touch, Kan Jong-wook, December, F.CUZ, COED School, Girls Day, KCM, Gavy N.J, Jung Jae-wook a big shout out to you!
Yes and that’s a wrap. Great day indeed. I got a signed album, I talked to Kevin and Alex, saw some good performances. I just wished I was able to get a picture with Kevin and Alexander.

Oh, what, you’re still here? Right, yeah, the answer to the question; Kevin has dry, rough hands. I’m sorry to burst your bubble. Your fantasies of soft, smooth hands are only a vapor. Perhaps he does yard work? I must say, Kevin and Alexander are such kind people. I feel sorry that there was not enough opportunity to talk more with them.

Suguishi says: Maybe I should give him some of my Victoria Secret lotion next time lol~ But I like his man hands<3 My hands are pretty nasty too, the cold is so terrible to your skin! T__T