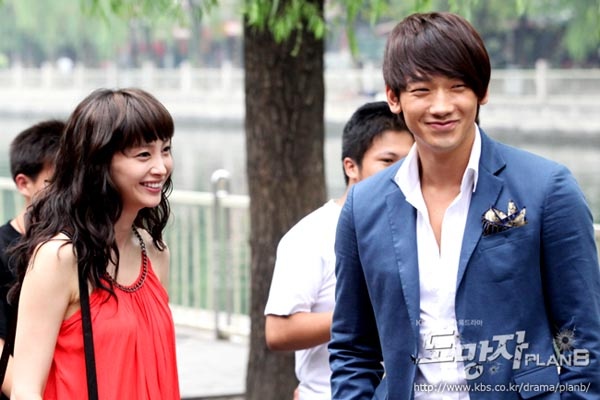 Runaway to End with a Special Broadcast

Although an extension for Runaway Plan B has been nixed, the finale will be pushed back a week thanks to a recent pre-emption; last week’s scheduled episode of Episode 18 was postponed because of the Asia Games. That means 18 and 19 air this week, and the finale broadcasts on Wednesday, December 8.

Since most premieres usually fall on Mondays, Wednesdays, or Saturdays (depending on the show), KBS is choosing to hold back its new drama President until the following week. They’ll fill the post-finale slot (Thursday, December 9) with a special broadcast of Runaway instead, which will give us the usual look at behind-the-scenes clips, NGs, and other unaired footage. (A couple media outlets report that the producers are still negotiating, while a few others announce it as a matter of fact.)

In any case, I expect there’ll be lots of Rain goofiness in the special — at least, there’d better be! Preferably with Lee Jung-jin. Mmm, Lee Jung-jin.

Meanwhile, injured actress Yoon Sohn-ha has announced that she will be returning to the show following what seemed like a pretty bad car accident. Her evil-bitch-with-a-stone-cold-heart character, Mi-jin, was written out of the drama in order to let Yoon heal; [MINOR SPOILER?] she’s improved enough to appear in the drama’s last two episodes, and will appear in a wheelchair. I suppose that fits in with the storyline, since her character was shot in a previous episode.

The delay is probably welcome news for the crew of President since, as you may know, the drama was angling to avoid directly conflicting with Daemul, as the two are both Wednesday-Thursday dramas about Korean presidents. They’ll still overlap, but for one week less than originally planned.

The drama stars Choi Su-jong and his wife Ha Hee-ra as president and first lady; despite both actors’ long careers, this is actually the first time they’ll be acting together in 17 years of marriage. I wonder if that rapport will give them extra chemistry, as high-profile spouses playing high-profile spouses. (Not that they need it, with all the acting talent.)

Rain
Runaway Plan B
How does this article make you feel?