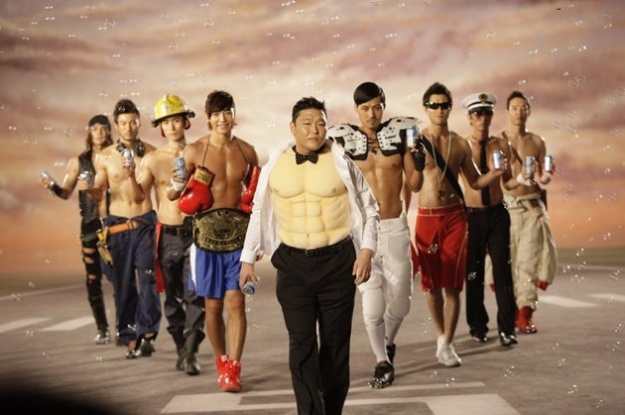 Artist of the month – PSY

Soompi’s artist of month for December is Psy. He debuted in February 2001 as a rookie hip-hop singer that stirred up the Korean pop music scene with very blunt lyrics, peculiar dance moves and an unconventional appearance. Because of his unique style he was nicknamed the “Bizarre Singer.”

Starting out with “Bird,” the title song of his first album, Psy showed off his own style, fashion and confidence. He broke down the stereotype among kpop music lovers that male singers have to be good-looking and be able to dance well. His in-your-face lyrics especially appealed to the younger generation of Korean music fans.

The fact that he graduated from the Berkley School of Music in the U.S. also served as a significant merit for the singer. However, just 5 months after his album was released, Psy’s album was not allowed to be sold to juveniles as various civic groups complained that it potentially is a negative influence for the younger generation. Several months later, Psy was arrested by the police on charges of smoking marijuana.

In January 2002, Psy was punished with a fine. His second album entitled “For Adults” was released in the same month and was also banned from being sold to those under the age of 18. Later that year in September of 2002, Psy released his 3rd album by launching his new music on an Internet music site. Being released just a few months after the World Cup games held in Seoul, the title song of Psy’s 3rd album, “Champion”, saw great success for its crowd-pumping vibe.

He continued to hold his spot as an artist that fans loved for his unconventional ways and refusal to adhere to society’s and the industry’s mold. Of course the inevitable came, and he went in to serve his mandatory military sentence from 2003 to 2005. However, evidence came to light that suggested Psy didn’t properly serve his full sentence. He was re-drafted to serve a second term in August of 2007. After being released the summer of 2009, Psy voiced how he had learned a lot through his experience.

He said he also felt the weight of his responsibility to his wife and two daughters that were born two months before he started his second term. Psy switched entertainment agencies in 2010 to YG Entertainment where CEO Yang Hyun-suk expressed his old time ties with the singer. Psy made his comeback in October of 2010 amidst the idol craze. However, true to form, he’s been embracing the fact that he’s nowhere close to idol status.

Sticking to his usual style without the over usage of the ever-so-popular auto-tune voice synthesizer, Psy’s showing another successful run with his music. For his latest album studio, he collaborated with all star artists such as Lee Jae Hoon of Cool’s for a track “In My Eye” while Seo In Young featured in “Thank You”. Jung Yup of Brown Eyed Soul and YDG also participated in the album.

Despite being a hip-hop artist, Psy is a very talented songwriter and he has written many hit songs of various genres for different singers. His most famous composition perhaps is Lee Seung Ki’s debut song “Because You Are My Woman”. Psy is a truly multi-talented entertainer.


Lee Seung Ki’s “Because You Are My Woman”

Artist Of The Month
PSY
How does this article make you feel?