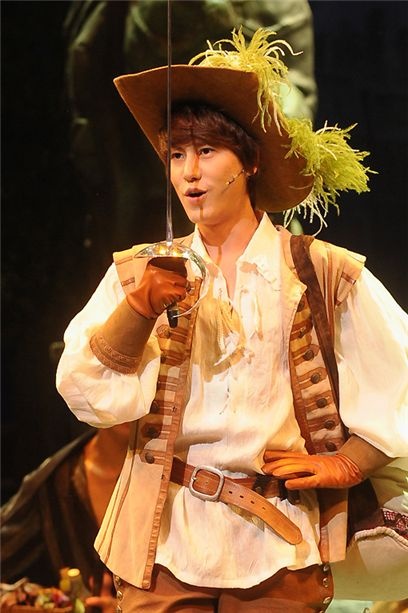 Super Junior’s Kyuhyun plays the role of d’Artagnan in the musical version of “The Three Musketeers”, which opened its curtains on Wednesday. He attended a press call at the Chungmu Art Hall in Seoul on Thursday, and spoke to reporters about the guidance he receives from his senior musical actors in the production.

“I have yet to give my first performance but I have improved my acting skills after receiving a lot of advice from senior actors after the rehearsals,” Kyuhyun said. He shares the role with TRAX vocalist Jay.

He was also quick to issue damage control about a previous comment he had made about getting scolded by his castmates when he makes mistakes. After joking that musical actor Kim Beom Rae reprimanded him often, Kim was said to have been attacked by Super Junior fans.

“I was only trying to say that the other actors treat me very well in a humorous way, but I think the fans took it the wrong way. Kim and the senior actors are very nice to me and give me guidance,” Kyuhyun said.

The musical will end its run on January 30. CSJH The Grace’s DANA also stars, as d’Artagnan’s first love Constance Bonacieux.

Dana
Kyuhyun
TraxX
How does this article make you feel?