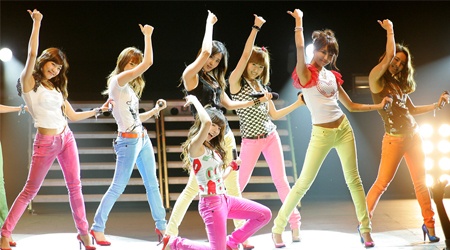 Congratulations! Whether you took a plane, bus, or car, you have made it to Los Angeles, and here are tips for getting to the concert venue.

I. Parking at Hollywood Bowl
Parking is limited at the venue, so it’s advisable to get there early to ensure a parking spot. Prepare yourself for some car and people traffic at the end of the night when thousands of people try to leave at the same time.

II. Park & Ride
This is an alternative to driving and parking at Hollywood Bowl. You can park your car at designated locations listed below. From there, buses will take you to the venue. Passengers with pre-purchased Park & Ride tickets will be given boarding preference, provided they arrive no later than five minutes prior to their ticketed departure time. All Park & Ride buses are wheelchair accessible.

Cost per person roundtrip:
$5 advance purchase at the Korea Times Main Box Office
$8 at the bus lot (cash only)

Lakewood (Line 660)
Lakewood Center Mall (Lakewood Blvd. and Candlewood St.) and parking area is off Candlewood St. and Graywood Ave. Bus departs across from Hometown Buffet. Departure times will be 3:30 & 4:00.

III. Bowl Shuttle
This the same concept as Park & Ride, but shuttles come much more frequently.

Ventura Annex Lot (Line 668A)
10601 Ventura Blvd. Parking lot is at corner of Ventura Blvd. and Lankershim Blvd. Departures will begin at 3:00 and run every 15 minutes.

For people that want an easy way to get to HB from Sheraton but cannot drive this is what you do:
Exit Sheraton and take a left, walk across the street and enter metro station 7th St Metro Center. Take the red line (This is very important otherwise you’ll end up on the purple line headed to ktown. Anyone else feeling the DBSK irony?) Anyhow ride that until you get to Hollywood/Highland. You should be really close to Grauman’s Chinese Theater on the Hollywood walk of fame. There is a bus stop at Highland & Hollywood (which is where you will be. I think it’s to the left once you exit the metro station.) You can either hop on the bus which comes every 15-30 minutes or if you want you can walk. I think it’s like a mile. Last year there were about 40-50 people walking with me and my friends so you won’t be alone. Also on the way back, I would suggest walking. The buses that are across the street were blocked by the hundreds of people exiting the stadium. There are tons of people that walk back to the metro, it’ll be around 12a but with all the people headed the same direction as you, you will be fine. It’s not hard to get there at all and if you get lost there will be a lot of people wearing kpop shirts so just ask around and they will get you to the right place. (cr. Mandyyy)

V. Taxi
You can typically find taxi cabs lined up at hotels, though they can be an expensive option. Plan ahead and have the number to a taxi company just in case.

Here is a site that estimates taxi fare.

Pre-concert activity begins roughly at 3:00PM and continues up to the 6:00PM when the ticket gates open. If you are picking up tickets via will-call, there is a booth in the pre-concert area for you to get them.

There are many booths with free goodies from sponsors such as fans, pens, glow sticks, light sticks, snacks, bam bam sticks, raffle prizes, and sometimes shirts. It’s a time for fans to congregate and get in the concert mood. Also, be on the lookout for flash mob dances!

Some fan groups organize meets to pass out support packages such as glow sticks, shirts, and balloons.

Doors open at 6:00PM. Be sure to get a program book, take a restroom break, and grab some food before you settle in for the long hours of fun!

The show starts with an opening act, followed by the Korean and American national anthem. Performances alternate between idol groups and older generation artists, and there are a few 15-minute intermissions. The concert culminates to a closing performance and fireworks to wrap up the show at 11:00PM. Get ready for a night full of screaming fans and sharing fandom!

Food and drinks policy
Unopened drinks are allowed into the Bowl. Food is also allowed, so I highly recommend bringing some because it will be a long concert! There is a market café inside the Bowl where you can buy food. If you have a box seat, you can ask a staff member to set up a table to have food and drinks on.

Camera policy
Digital cameras are allowed. There should be no problems with regular point-and-shoot cameras. The rule is that camcorders and DSLRs are not allowed, but people try to bring them anyway. If security sees people camcorders or DSLRs, they may get warnings to get it taken away, or nothing may happen at all.

I. Merchandise in Koreatown

If you want to purchase K-Pop CDs and posters, be sure to make the trip to Koreatown! There is a store called Music Plaza in Koreatown Plaza and another music store in Koreatown Galleria that have a really good selection of Korean music. They’ll definitely have music from idols and recent hits. However they usually sell out of posters early on in the concert weekend so be sure to visit these stores before the concert if you want posters. You can find transportation to Koreatown by the Metro.

II. Weather
With an outdoor venue, the early half of the concert can be very warm in the sun, and very chilly once the sun sets. Sunblock and a light jacket are both highly recommended!

IV. Buying/Selling/Trading KMF tickets
As ticket sale starts, Soompi will open a thread to members to buy, sell, and trade tickets. The thread will be created in the selling & trading section. Here’s an example of how the thread works. Be careful when buying and selling online.

Hollywood Bowl
How does this article make you feel?