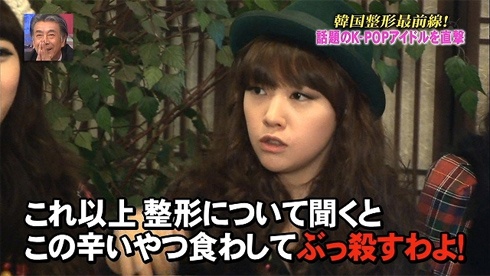 On January 24th, Japanese television station Fuji TV aired a segment titled “Plastic Surgery Has Become a Way of Life for Korean Women,” in which Girl’s Day was featured.

Comedy duo Oriental Radio (the hosts) were ordered to ask Girl’s Day if they had plastic surgery by the producers beforehand. Girl’s Day had agreed to appear on the show believing they were there to promote their single “Nothing Lasts Forever.”

Once seated at a Korean restaurant, the hosts hesitantly asked, “Where have you had plastic surgery?,” leaving Girl’s Day members in a state of disbelief.

Girl’s Day then asked the hosts if they could sing a part of their single, still believing they were there for promotion.

Netizens responded to this broadcast by asking, “Are they trying to damage Girl’s Day’s reputation?” and “A lot of Japanese celebrities get plastic surgery as well, so why are they making it look like only Koreans do it?”