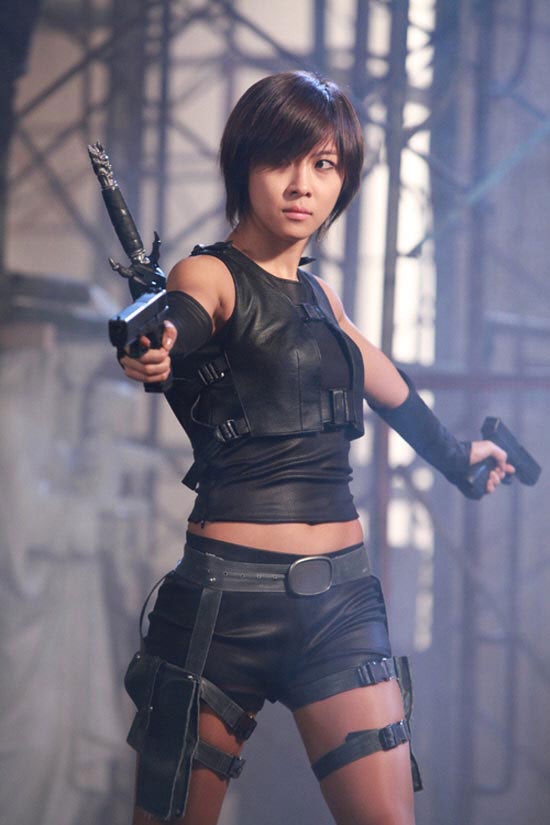 Ha Ji Won is the “ideal type” in the eyes of many male stars. Her character on “Secret Garden,” Raim, has been turning a lot of heads and gotten the attention of male stars. Since her debut in the entertainment industry in 1997, Ji Won has attracted a large fan club due to her outstanding acting skills, great looks and personality.

Recently Go Soo appeared on MBC’s “Section TV Entertainment News” where he stated his ideal woman was Ha Ji Won. Interestingly, this was not the expected answer to the question asked. The question originally asked Go Soo was among the actresses that he had already worked with (Kim Ha Neul, Son Ye Jin, Kim Hee Sun, Han Ye Seul) which was his ideal type, and he replied, “my ideal type in not any of them. My ideal type is Ha Ji Won.”

Ji Won later expressed her thanks upon hearing Go Soo’s response, saying “I feel great. Thank you.” In the past the two have worked together filming singer Luey’s music video, “Lue,” for his debut album back in 2001. Another interesting fact is that they are the same age, both born in 1978.

Another Ji Won fan is Jang Geun Suk, who has stated “Ha Ji Won is so pretty and nice that anyone can easily fall in love with her.” He speaks though from his own experience of having worked with her in the past. Both of them appeared together in the 2006 KBS 2TV’s “Hwanggini.” Jang Geun Suk acted the role of Kim Eun Ho, a young man of noble birth, who falls in love with Hwanggini, gisaeng (a Korean geisha) who was played by Ha Ji Won. Two years ago on KBS 2TV’s “Lee Sang Hyung World Cup,” he revealed that he really fell in love with Ha Ji Won while he was shooting the KBS 2 drama. Just another crazed fan I guess, lol.


As if the competition couldn’t get any tougher, 2PM’s Taecyeon also chose Ha Ji Won as his ideal type. His confession came on a previous tv program but last year on SBS’s “Sweet Potato” they had asked him who his ideal type was and he replied, “ever the same, Ha Ji Won.” His single hearted love was kind of expected back at 30th Blue Dragon Movie Awards in 2009 where he took off his shirt and showed off his six pack during their performance.

A different approach was taken by Jo Sang Wook who stated last month on tvN’s “Talk Show Taxi” that he preferred boyish type women. Lucky for him Ha Ji Won has a boyish style haircut at the moment. What do you know when asked for further details, he said he was really into Ha Ji Won. So the current VIP fan club bus now has four wheels/members.

But wait every bus has a spare tire and that is Lee Sung Jae. Last October during the public movie interview for “Natalie” he stated that he would very much like to act with Ha Ji Won. “In the past, when reporters asked whether there were any female actresses that I wanted to work with, no one really popped up in my mind, but now I have someone. I think Ha Ji Won is a great actress. I feel like we would be able to act well together.”

By this point we should just start a Ha Ji Won fan club exclusive for the stars so it can exist in reality. I just hope I never meet her or else I may get caught in her seemingly irresistible charm and beauty. Actually that may not be the worst thing but the competition worries me, but first I will start working on that 8 pack, 1000 sit-ups per day should do it. Thanks for being so stunning Ji Won, 1, 2, 3, 4, 5, 6, 7. . .

Ha Ji Won
Secret Garden
How does this article make you feel?