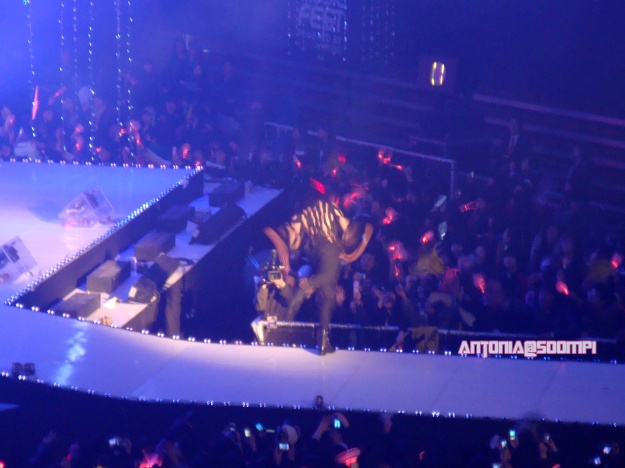 Lee Joon, superstar singer of Mblaq, took a giant fall while trying to do a maneuver during his performance of “Oh Yeah.” For a moment, it was thought it was part of the show. But for more than five minutes, Lee Joon did not get up from the ground. The staff did their best to assist, and the show was put on hold for an additional 13 minutes, while the group and fans worried about his safety.

But wait?! The lights went dim for a while and Lee Joon returned to do a solo dance! Stay was then performed while Mir came in to do a few solo raps and then left the stage. From what it looked like, there was no padding on the bottom of the ground and Lee Joon took a pretty hard fall. Its unlikely this event was staged. What happened afterward was thought up on the fly, or we guess to keep the show moving along.

I was able to get ONE picture of it just as he landed like a load of bricks onto the ground. The stage platform is estimated around 8 feet tall. Suguishi was waiting for Lee Joon to take off his shirt *cough* and thats why she has a picture for us.

Lee Joon is probably back stage getting all patched up after he decided to pretend he was OK. Let’s hope he’s ok since he had a bad week. If this event was staged, it sure gives some additional things to talk about.

Daum
Lee Joon
MBLAQ
How does this article make you feel?