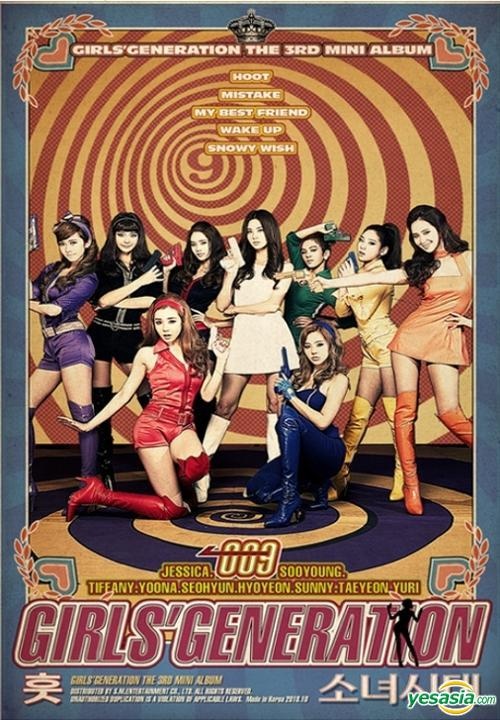 One of Korea’s top girl bands, SNSD finally makes a comeback with their third mini album, after taking some time off in Korea for their Japanese debut. The girls return this time as spy girls as shown through their title track, “Hoot” and its music video. Composed by Alexander James and penned by Lee Hyun Gyu, this upbeat dance number has a 007 feel right from the start. Listeners can hear SNSD’s strong vocals and emotions as they sing about standing up to a troublesome boy.

The album continues on with “Mistake,” a medium-tempo ballad composed by Cheryl Yie, penned by Kwon Yuri, and arranged by the famous Kenzie. The song starts off with soothing guitar arrangements followed by mellow singing. I guess my favorite part would be the catchy chorus which I felt brought out the girls’ feelings. In fact, I think the chorus was what helped me appreciate this song – without it, it would not have been as memorable.

“My Best Friend” is the next song – a sweet and soft medium tempo number that shifts to louder, pop-rock sounds. The girls seem to be going for a cute and girly concept as they sing about what they see in a good friend.

The fourth song is “Wake Up,” the second upbeat dance number in this album, composed and arranged by hitchhiker, who is well-known for producing hit songs such as Brown Eyed Girls’ “Abracadabra.” I actually had to listen to “Wake Up” more than the others for it to grow on me. Now, it beats “Mistake” and “My Best Friend” on my list. The heavy bass and rhythms along with the girls’ fierce vocals eventually got me bobbing to the song.

The mini-album ends with yet another medium-tempo number titled, “Snowy Wish.” Sadly, this track was nothing more than lackluster. There was nothing special about this winter-themed song and it was very reminiscent of SNSD’s past “filler” songs.

Overall, I felt that the mini-album had one really good song, “Hoot,” three mediocre songs, “Mistake,” “Best Friend,” and “Wake Up,” and one can-do-without song, “Snowy Wish.” The middle three tracks had potential. Yes, they were catchy, but they were definitely not up to par with the title track. I also felt that they could have chosen a better song to tie up the album. As a K-pop listener always anticipating SNSD’s new album concept and songs, I felt that the girls could have done better. However, the title track was not a letdown. (Also, on a brighter note, the first press limited edition comes with a bonus set of stickers of the girls and a photo card.)