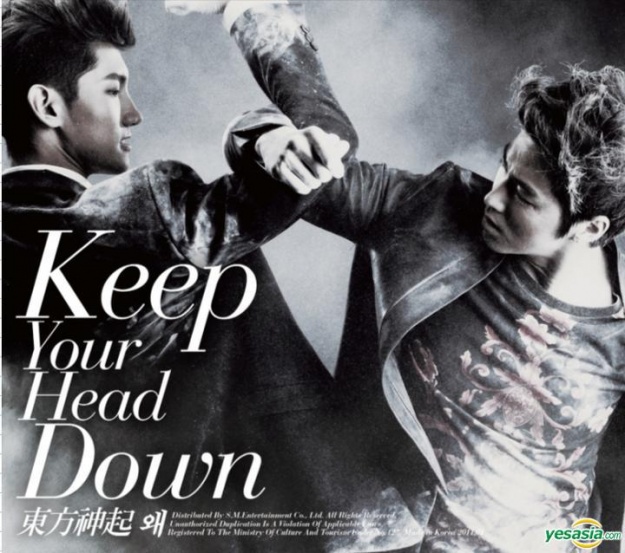 In the midst of lawsuits and conflicts, TVXQ makes a comeback to the Korean music scene after two years and three months as a two man show. The remaining members, Yunho and Changmin return more mature and fiercer than ever with their fifth studio album, “Keep Your Head Down.” The album consists of ten new tracks including a solo song from each member and a100 page photo book.

The album starts off with the action-packed title track, “Keep Your Head Down” composed, penned, and arranged by one of SM’s top producers, Yoo Young Jin. Right from the start, you know that this is quality music filled with much energy. The dance number incorporates rock elements and the duo’s powerful vocals helps tell the tale about being filled with anger after an ex-lover leaves.

The next song is “How Can I,” a ballad accompanied by beautiful piano and string arrangements. The melody isn’t anything too special, but Yunho and Changmin does a great job lending their emotional vocals here. All in all, the boys’ singing eventually won me over as I no longer skip this song when listening to the album.

Track three,” MAXIMUM” is another dance piece by Yoo Young Jin. It incorporates Asian sounds which I got a kick out of. I also loved it when the boys shouted traditional Korean chants such as “ulsooh!” in the beginning of the song. Overall, a great fusion number tying Eastern and Western elements into one.

“Honey Funny Bunny” is a Yunho solo created by E-TRIBE. Unlike the former tracks, this medium-tempo R&B dance song takes on a more mature route as it holds lyrics about wanting to sleep in a lover’s arms. The song was quite catchy except maybe the repetitious “honey funny bunny” phrases. Changmin’s solo on the other hand is called “Confession,” a ballad number showcasing the singer’s vocal skills and range. Yet, the song was on the boring side. Too bad it seems that Yunho got a solo catchier than Changmin’s.

Apart from the title track, my second favorite song in the album would be “RUMOR,” a medium-tempo number with smooth sounds and vocals from the boys. The rap towards the end was also quite catchy. The song is about a man filled with anguish when his lover turns away from his love after hearing false rumors.

Track 8 is “Our Game,” another favorite of mine. This dance number has some appealing beats accompanied by haunting vocals and aggressive rap. Pop lovers might especially like this song as well. The album then transitions to “SHE,” a medium-tempo R&B number. Again, another one of the better songs off the album.

The album finishes off with “ATHENA,” a song from the popular drama series of the same title. Because the show is of the action and thriller genre, it is no surprise that the song portrays these qualities through intense strings and dramatic vocals.

In conclusion, TVXQ has surpassed my expectations. Although the group is no longer five members, I felt that the remaining two did a great job holding it out and coming back successfully. The majority of the songs were catchy and worth listening to over and over again. And most importantly, this album has topped some of their past works on my list, so I am content.