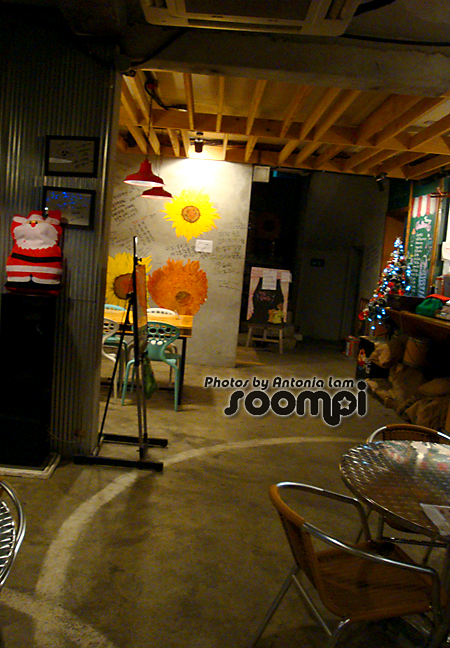 Drama
by A. Lam

Welcome to another episode of K-POP Foods! Where we talk about K-POP and FOOD, delivering the best of both worlds in a single bite!

Previously, in our journey for the greater truth—

Today, I have another dish served for the review, the 1st Coffee Prince Coffee Shop in Hongdae.

Perhaps one of the most talked about k-drama of all times, Coffee Prince, actually has a REAL legit coffee shop. Did you know this?! The whole drama was actually filmed on location at the store bought by MBC for that promotional purpose.

If you don’t care about wasting time, money, and being treated with poor customer service, be my guest— but still, and perhaps the worse of all— NO HOT GUYS serving you coffee and waffles. I am ETERNALLY SAD-FACED.

I give this place a score of negative 50 waffles rating for making me miserable on my birthday! >:(

Also, as a side note, I would like to add that THIS particular store (the main store) of Coffee Prince is actually the only one I have problems with. Thus far, I have visited the one across the campus of Kyung Hee University in Suwon and the one at MBC’s lobby, and this one (the original movie-set store). Both are friendly AND WITH HOT GUYS serving you at the counter, but at this one—you have an ajumma and a girl serving you coffee with a free side of attitude. (nothing against females btw �de42

Just wanted to emphasize the “hot guys” part to convince you to go (Across KyungHee University, Suwon):

Did you… ENJOY DELICIOUS CHOICE �de42 Picture is ninja-fabulous.

I believed they forgot to put “hawt menz” on the menu for the price of 0 won per serving.

Melt in your mouth goodness waffles and icecream set for 2 (with coffee 15,000won). Can I get no-tomatos with that? No, perhaps not…

Mmmmmm… Ahh yes, I agree. The coffee was quite fragrant. Ninja pic will continue to be ninja �de42

As for THE store, the original main one of the Coffee Prince chain…. we have quite a different story:

So I’ve always heard stories about how rude they are at this store, with stories ranging from how “you cannot take a picture of the store on the street unless you paid for their coffee”, to how “they will follow you around until you pay for the coffee or they will make you leave”. I didn’t believe it, so I decided to go there on my birthday, thinking that it would be ok still because it cannot be THAT bad…. Right?

I went in after my wonderful experience at Babtol’s thinking that it would be another normal coffee place with normal prices (just like OTHER branches of the Coffee Prince store). At first glance, I was super excited that I was on the set of Coffee Prince, but that only lasted about 20 seconds as we were basically being stalked and pressure to order a coffee almost the moment we went into the store. We were allowed to sit at the table for large parties only because we have around 7 people that day. That table had a sign on it, honestly, that table can only fit about 5 people. We had to go around the store LOOKING for chairs ourselves so we can sit at the reserved table. We sat down, and were taking sometime to order because this menu is like a dumbed-version of the normal Coffee Prince’s menu with bad photoshopped text and pictures printed on paper and laminated poorly! X__x;; It’s completely different! Not only does it NOT have Coffee Prince’s specialty—–WAFFLES, they are selling a small slice of cake for 9000won and a small cup of regular coffee for 7000won! That was more than my omelet! So we decided to order something and split the cake, as we just wanted to see what this place is like and jet out of there to our next destination.

Apparently, we can’t share our food as well! Each person MUST order a menu item before they can take any pictures! It was such a rip off, so we decided to get our money back and cancel our order (but not before snapping a few *cough*pictures*cough* of course.)

Actually the price and the food is still not the reason why I have beef with this place. My beef with them is the overall poor management of the place:

1) Upon entering, not only were you not greeted, but you were asked to buy your coffee ASAP.

4) There were no rules posted up at the door saying that your super expensive coffee is you “entrance ticket” to this supposed paradise of a movie set.

5) They continue to pester you about ordering even when you were still trying to decide.

6) They give you 1 menu to share between 7 people—of course.

7) You cannot go upstairs!! (What?! So I have to buy this expensive coffee to be on the 1st floor only? What about the 2nd floor? They filmed a lot there too! The most important scenes are there in fact!)

8) My Korean-American friend was doing her best to speak Korea to the worker, but instead, the worker rudely told her, “I rather you speak English to me” or something to that extend.

9) Wait, where are my hot guys? The appeal? The basic storyline is about a bunch of hot guys working at a coffee shop and yet there were not even ONE male employee there? Not even an ajusshi? (and yet at other locations they hire good looking guys to work there. I don’t understand. This baffles me to no ends �de1b Look above for ninja-pix^)

10) The menu is completely different from all the other branches, and honestly it wasn’t that good.

however, I do have one good thing to say about this place, if you’re willing to pay 8000won for iced coffee, and view that as your entrance ticket “gift”. It is probably not too bad (but that is only if you have previous warnings of this place). I still think it was really cool that the shop is the actual movie set and have the actor’s autograph on the walls and lockers. It looks exactly the same! It was like living there with the characters!— but that’s like saying that Lotte World is where they filmed Beast singing Beautiful, and the English Village is where Super Junior filmed the Super Junior Show——– basically, what I’m trying to say is— it’s just another place in Seoul, only difference is that they feel like giving you poor service and ripping you off on it while they’re at it.

Negative 50 waffles and 7 very sad faces with thumbs down

Coffee Prince
How does this article make you feel?