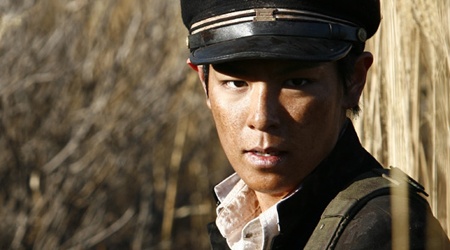 Big Bang’s TOP, also known as Choi Seung Hyun, is nominated for the Rookie Award at the Asian Film Awards (AFA), a subdivision of the 35th Hong Kong International Film Festival. TOP has firmly established himself as actor Choi Seung Hyun with projects like drama “Iris” (2009) and movie “Into the Fire” (2010).

In “Into the Fire,” Choi Seung Hyun plays Jang Bum, one of 71 students who were forced to fight in the Korean War. Because he is the only one with combat experience, he is assigned the role as squadron leader by his commanding officers. He acted alongside veteran actors Kwon Sang Woo, Cha Seung Won, and Kim Seung Woo and still managed to shine despite being a rookie. Choi Seung Hyun was also able to beat out Go Soo, Song Joong Ki, and Daniel Choi for the rookie award at the Blue Dragon Film Awards. Mark Chao Yu-Ting of Taiwanese movie “Monga” (2010), Aarif Lee of Hong Kong movie “Echoes of the Rainbow” (2010), and Zhou Dongyu of Chinese movie “Hawthorne Tree Forever” (2010) are also nominated for the Rookie Award.

Actors Chow Yun-Fat of “Let the Bullets Fly” (2010) and Ha Jung Woo of “The Yellow Sea” (2010) are nominated for Best Actor while actresses Jeon Do Yeon of “The Housemaid”(2010) and Yoon Yeo Jung made the nominee list for Best Actress. Cinematographer Lee Mo Gae of “I Saw the Devil” (2010), screenwriter Park Hoon Jung of “The Unjust” (2010), composers Chang Young Gyu and Lee Byung Hoon of “The Yellow Sea” (2010), and costume designer Choi Se Yeon of “The Housemaid” (2010) are other Koreans that made the nominee lists for their respective awards. The AFA ceremony will take place March 21st.

Choi Seung Hyun
How does this article make you feel?