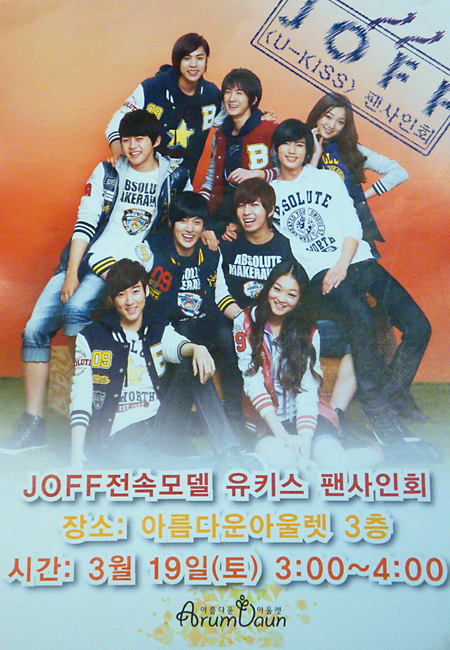 "Editing" Out U-KISS Alexander and Kibum from the Fansigning Banner

The clothing brand, JOFF, was sponsoring a U-KISS fansigning today at the Arum Daum Outlet. This is the first fansigning event after Kibum and Alexander’s contract have been terminated. The new members Hoon and AJ were not there, but only the original 5 members were there today signing and meeting the fans.

It really upset the fans when they saw the giant sized banner hanging at the signing.

Can you see what’s wrong with that?

“It’s so NOT obvious! The fans are TOTALLY not gonna notice!” – Banner Editing Person

The text conveniently covered Alexander and Kibum’s entire face to censor them out. You can compare this picture with the original above.

One might argue that Eli and Kiseop’s faces were half-blocked, but it was not intentional like the “editing” job they did on Alexander and Kibum. It was such a sour reminder to the fans that Alexander and Kibum, whom they love and supported for years, were no longer there.

The big white letters completely blocked out their faces, but of course, it was really obvious to the fans that it was them.

They might as well put a big red ‘X’ over their faces. It would have brought out the same reaction.

Oh no they didn’t!

Oh yes, they did!

U-KISS
miscellaneous
How does this article make you feel?