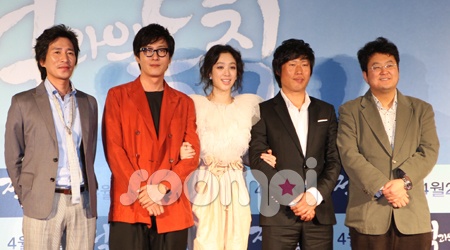 Director Park Gun Yong returns with film “Sleeping with the Enemy.” The movie is set in the 1950s with the Korean War as its backdrop. The story takes place in a peaceful village called Suk Jung Ri; and Seol Hee (Jung Ryeo Won) is the soon-to-be-married granddaughter of the village mayor. However, Seol Hee meets North Korean soldier Jung Woong (Kim Joo Hyuk) when his troops retreat to the village, and the two fall in love.

The press conference took place on March 23rd at Seoul’s Dongdaemun Megabox. Actor Kim Joo Hyuk has appeared in films like “My Wife Got Married” (2008) and “The Servant” (2010). Jung Ryeon Won has shown her versatile acting abilities by playing distinctive characters in movies like “Two Faces of My Girlfriend” (2007) and “Castaway on the Moon” (2009). Filming for “Sleeping with the Enemy” started last summer, and Kim Joo Hyuk commented, “The military costumes were really hot. It felt like a thick blanket in the sultry sun.”

Jung Ryeo Won added, “My character is a country maiden who spends a lot time out in the sun. As a result, I had to wear darker foundations at the beginning of the shoot. Towards the end of filming, it got to the point where I didn’t have to wear the foundation because I was so tanned. A lot of people commented that I looked healthier with darker skin. I had a lot of fun with this new change. I worked harder on this film because I wanted to show people I can do period films as well.”

Jung Ryeo Won
Kim Joo Hyuk
Sleeping with the Enemy
How does this article make you feel?