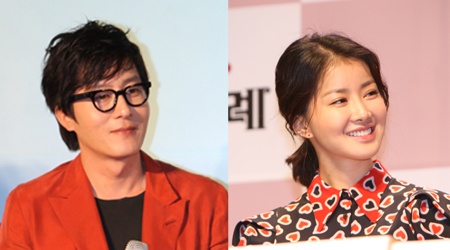 Actors Lee Shi Young and Kim Joo Hyuk have been casted for a new rom-com movie titled “Couples.” Both Lee and Kim are awaiting the theatrical releases of their other movies – Lee Shi Young’s “A Dangerous Meeting” and Kim Joo Hyuk’s “Sleeping with the Enemy” premieres March 31st and April 28th respectively. “Couples” will be directed by Jung Yong Ki who also directed “Marrying the Mafia II” (2005) and “Once Upon a Time” (2008).

Filming is expected to begin this coming May. Just as the title insinuates, “Couples” will pair up Kim Joo Hyuk with Lee Yoon Ji and Lee Shi Young with Oh Jung Sae as couples. This is Kim Joo Hyuk’s first time working with director Jung Yong Ki and Lee Shi Young’s second. She has worked with Jung for the 2009 movie “Hong Kil Dong’s Descendants.”

Aside from “Couples,” Kim Joo Hyuk is signed up for “Fighting Spirit.” He will join “Couples” as soon as he finishes filming “Fighting Spirit” with Kim Sun Ah in late May. Kim Joo Hyuk’s previous filmographies include “Singles” (2003), “Blue Swallow” (2005), “My Wife is Married” (2008), and “The Servant” (2010). Lee Shi Young has recently made a name for herself with her win at the 7th National Woman’s Rookie Amateur Boxing Tournament. “Couples” will be her second consecutive rom-com following “A Dangerous Meeting.”

A Dangerous Meeting
Kim Joo Hyuk
Sleeping with the Enemy
How does this article make you feel?