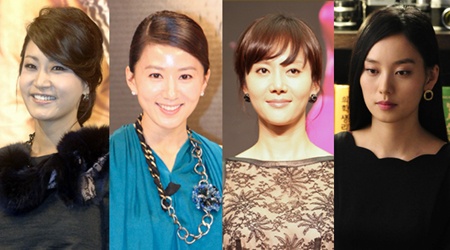 Analysis of the Ambitious Femme Fatales of Korean Dramas [part 1]

Currently in K-drama land, femme fatales are all the rage. Femme fatales are defined as irresistibly attractive women who lead men into difficult and dangerous situations. Typically in Korean dramas, they either set traps for the female protagonists or boil in wrath and turn into wicked witches when they feel like they’ve lost their boyfriends/fiancés. These days, Korean femme fatales are driven for more diverse reasons – such as personal ambitions and complicated stories about their troubled youth. They used to be physically characterized as fierce sexing looking women with sharp eyeliners. Now, they each have their own distinct expressions and strategies to compete against the heroines. This will be a five part femme fatale series, so stay tuned!

She is the incarnation of ambition. Yoon Na Young will do everything in her power to achieve happiness. She sacrificed her family to become the daughter-in-law of a chaebol family and will go through fire and water to make her adopted son the successor of the family company.

Common sense and accepted social standards have no place in Yoon Na Young’s mind. She couldn’t care less whether her sister has an affair with her husband’s married brother or when her adopted son and biological daughter fall in love. However, she can turn into a cold-hearted woman who coolly dismisses any obstacles –whether they be the happiness of her sister, adopted son, or her biological daughter – if they were to get in her way to achieving “happiness.”

Yoon Na Young can transform into a different person depending on her needs. When she’s in front of her in-laws, she’s everything a perfect daughter-in-law should be – obedient, frugal, and humble. To her son, she’s the mother a son can lean on.

Perfect Match: Nam Ae Ri (Sung Hyun Ah) – The rivalry between Yoon Na Young and Nam Ae Ri is fierce. Since the beginning, they’ve worked to uncover each other’s dirtiest secrets, and neither one of them are discouraged by the sharp twisted comments they throw at each other. A video that has compiled all the battle scenes between Na Young and Ae Ri is gaining popularity online and can be found on http://instiz.net/bbs/list.php?id=clip&no=27587