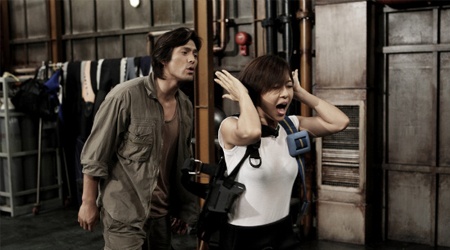 Ha Ji Won looks ready to kick some major evil-creature BUTT. Upcoming summer blockbuster Sector 7 is whetting our appetites just enough to get us clamoring for some actiony goodness. The 3D creature feature from the director of May 18 and the producer of Haeundae has been years in the making, and from the looks of it, it might be worth the wait.

The action/sci-fi film is set on an oil rig out at sea, where the inhabitants will encounter Mystery Monster, reportedly in development for its 3D CG effects for two years before the film went into shoots. It boasts a 10 billion won budget, and well, it sure does look slick, though I suppose most of the dough was spent on the creature from the big bad blue.

I love that Ha Ji Won looks more hardcore than all the dudes in the group photo. The cast is a pretty hefty one, with Oh Ji Ho (Chuno) as Ha Ji-won’s boyfriend, Ahn Sung Ki (Fair Love) as the oil rig’s captain, Song Sae Byuk (Bang Ja Chronicle) as a welder, and Cha Ye Ryun (Dr. Champ) as an oceanographer.