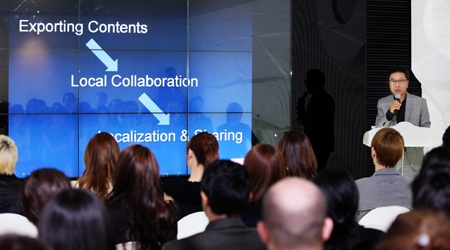 Since 2006, Lee Soo Man has been guest speaking at various institutions like Harvard, MIT, and Cornell. During his lecture to Stanford students, he talked about the theory of CT (Culture Technology) as well as business management strategies that have allowed SM to grow into a global leader of the Hallyu wave. Lee Soo Man also emphasized the importance of doing something one enjoys. He stressed interest, concentration, and passion as keys to success.

After the lecture, Joseph (28), stated, “It was a very passionate lecture. It was amazing to hear how Lee Soo Man was able to grow SM into the powerhouse it is today. There are a lot of students at Stanford who are interested in the entertainment industry, and this lecture was a great opportunity for us to understand a bit more about the business.” David (29) added, “It was a very interesting and exciting lecture. Out of the big three Asian countries, it seems like Korea’s entertainment industry has the most influence in Asia.”