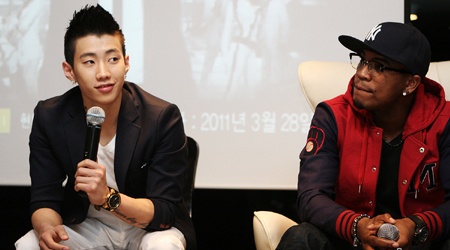 On March 28th, Jay Park and Ne-Yo teamed up at Seoul’s Hyundai Department Store Culture Hall for the Dream Academy. The two met to inspire and share their talents with 80 children from financially-burdened families who dream of becoming musicians.

During the event, Jay said, “You must truly enjoy what you do.” He followed the comment with his own personal stories, encouragements, and advices for the aspiring children. Jay added, “I didn’t necessarily dream of becoming a singer when I was little. I simply loved dancing and music, and this path naturally opened up. To tell you the truth, I wasn’t even that good in singing a couple of years back; and I’m still nowhere as good as Ne-Yo. However, nonstop practicing as well as positive thinking helped me get to where I am today.” Jay Park and Ne-Yo displayed a heartwarming bond as the two interacted throughout the event. Jay acted as a special translator to Ne-Yo and his Korean fans.

Afterwards, Jay confessed, “I was thrilled to have been given the opportunity to perform the opening number at Ne-Yo’s concert. I’ve always looked up to Ne-Yo, and I’m a huge fan. Coming here and talking to these children with him has been great! He’s definitely a great guy; and despite being a world star, he’s very humble and compassionate. I’ll do my best to show a great performance at Ne-Yo’s concert.”

Ne-Yo will perform on March 30th at 8PM at the Olympic Gymnasium in Seoul.

Jay Park
Ne-Yo
How does this article make you feel?