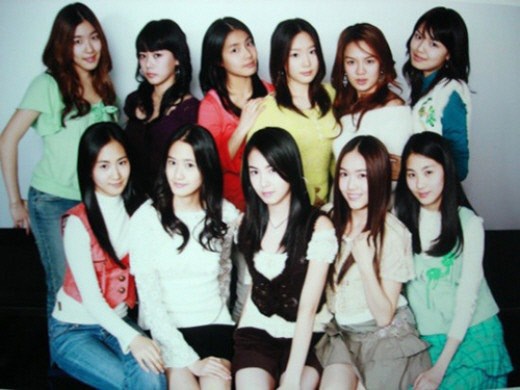 It’s always disheartening to miss out on a chance to make it big. Especially, if you were this close to joining an idol group as popular as SNSD, the devastation must be bigger. The following list of girls, who are now enjoying much popularity as pop stars, had a real good chance of becoming SNSD members according to a recent article posted in one of the popular Korean KPOP blog sites. Although these female celebrities have now moved on to lead their own respective careers, I would imagine them having some regrets for not making it to SNSD (or is it the other way around?).

Seo Hyun Jin, best known for her role in MBC drama “Mate,” was once the lead singer of girl group M.I.L.K. A four member girl group similar to the image of SNSD, M.I.L.K was quite popular in the early 2000s. After releasing their first and only album in 2001, the group abruptly disbanded in 2003 for unknown reasons. She trained with SNSD girls, and rumor has it that SNSD’s first single “Into the New World” was supposed to be the title track of M.I.L.K’s second album.

Zhang Li Yin, better known as Jan Ri-in in Korea, is a Chinese solo singer trained by SM Entertainment. Her debut album in 2006 featured hit single “Tiimeless,” and she was named the “Best New Solo Artist” at the M.net Asian Music Awards. Some call her the “Chinese BoA” and the next leader of the Korean Wave as she’s fluent in both Mandarin and Korean.

Lee Yeon Hee, who debuted through KBS drama “Sea God,” in fact was the winner of SM Entertainment’s recruitment competition, “SM Teenage Contest,” in 2001. She beat out 8,000 other competitors to win the contest, and since then, she became friends and trained together with the SNSD girls. She said on a Korean variety show that she advanced to the audition finals only to lose to Soo Young for a spot on SNSD.

T-ara’s So Yeon was already popular when she was an SM trainee as a potential SNSD member. She also admitted on a Korean variety show that, “I worked on the choreography of ‘Into the New World’ with SNSD, but later dropped out.” She now works under Core Contents Media, a subsidiary group of CJ Entertainment.

Chan Mi of the 5 Dolls recently sparked a lot of interest from netizens following her comment on a Korean variety show where she said, “I almost became an SNSD member. At the time, I was in 7th grade and was younger than Seo Hyun, the youngest member of the group.” She even revealed a photo of her posing together with the rest of the SNSD girls in their pre-debut years.

Actress Kim Min Ji, who’s now four months into hosting the KBS “Music Bank,” was first cast on the streets in 2007 and won an SM Entertainment audition in the past as well. She recently told local media that, “If I had continued training under SM Entertainment, I might have become an SNSD member.” She’s been generating a lot of fan interest lately after her middle school graduation photo got leaked.