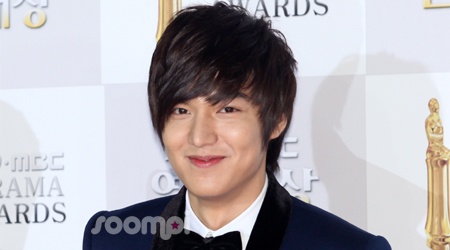 Lee Min Ho’s Facebook page has more than 3 million Facebook friends. (His Facebook page is www.facebook.com/OfficialleeMinho) On Famecount.com which is a worldwide SNS ranking site for actors he is listed as number 8. (www.famecount.com/facebook-rank/Worldwide/Actor)

Number one on this website is Megan Fox and Lee Minho’s fellow cast mate on “Boys over Flowers” Kim Hyun Joong. As of March 31st 10 am (South Korean Time) Lee Minho has 3,000,141 Facebook Likes. On his wall are posts from over fifteen countries all over the world. The number of likes has increased according to the different activities he engages in. However after being cast for “City Hunter” the news has spread to Thailand and the Facebook friends have shot up in numbers. Lee Minho also has another page (t.sina.com.cn/actorleeminho) for fans, namely Chinese fans without access to Facebook and over there he has 228,108 fans. Lee Minho’s talent agency Starhaus warned that after “Personal Taste” was broadcast outside of Korea and news of Lee Minho appearing on “City Hunter” had been released, there is a fraud acting like Lee Minho on twitter. Starhaus cautions fans to check the legitimacy of websites to hear news from Lee Minho.