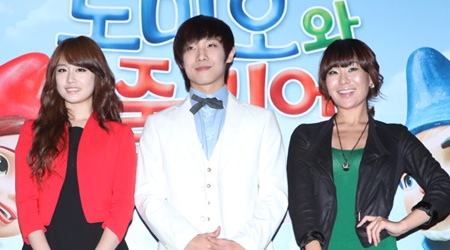 Gnomeo and Juliet is an animation film loosely based on William Shakespeare’s timeless classic Romeo and Juliet. It is a love story about a gnome couple from families that hate each other. Gnomes are legendary small humanoid creatures that come alive when humans leave. Hollywood celebrities James McAvoy and Emily Blunt voiced the main characters Gnomeo and Juliet for the Hollywood version; and Elton John composed the original music and songs for the film’s original soundtrack . For its Korean release, MBLAQ’s Lee Joon, T-ara’s Ji Yeon, and comedian Jung Joo Ri teamed up to dup the animation.

At the press conference for the movie, which took place April 4rth, the trio radiated happiness and confidence. While both Lee Joon and Ji Yeon are originally music artists, the two are steadily increasing their acting repertoires. Comedian Jung Joo Ri has also established herself as an actress with prior dramas like MBC’s Tamna the Island (2009) and More Charming by the Day (2010).

Lee Joon: Gnomeo is a mischievous gnome and is in love with Juliet. He’s also the leader of the blue team in the movie. The two gnome families are from different territories and have different colors. The Montagues are blue, and the Capulets are red.

This was your first time dubbing. How do you feel?

Ji Yeon: I was thrilled to have had the chance to challenge myself. I was a bit nervous at first, but dubbing has its charms. Voice acting is still acting, and I tried my best to do well.

Lee Joon: I’ve seen a lot of dubbed animations when I was younger, and I was always awed by them. However, I never imagined I would ever be the one dubbing for an animation.

Jung Joo Ri: This isn’t my first time voice acting; I’ve dubbed for Garfield 2 back in 2006. It was a lot easier dubbing for Nanette because her personality is more in line with mine. My voice acting coach has also praised me for my improvements.

How did you prepare for voice acting?

Ji Yeon: I have a husky voice, so I tried to act in a higher tone for my character. However, I had a hard time during the recording because I had caught a cold. My voice acting coach helped me a lot by practicing my lines with me for an hour before recording on set.

Lee Joon: I prepared several voices with different intonations because I felt the audience might get bored with a mundane voice. However, I couldn’t use any of them because the producers wanted me to use my normal voice as is.

Jung Joo Ri: I heard I was casted because of my personality – it’s a lot like Nanette’s. So I tried to put a lot of me in the voice. I recalled memories of when I was happy or sad because of love and tried to express the emotions I felt then to my character.

Lee Joon and Ji Yeon are active in both singing and acting. What do you find more difficult?

Ji Yeon: Singing and acting is different, and both have challenging moments. The two activities have their different charms and I’m totally into both jobs.

Lee Joon: It’s impossible to point out which one is “more” difficult. They’re both challenging and demanding. In acting, you’re able to use both facial expressions and voice intonations. Voice acting is a bit more challenging because you have to express all your emotions into your voice.