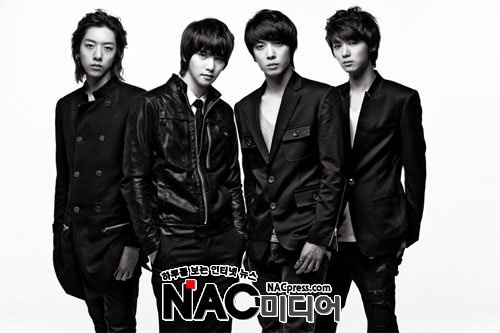 Artist Of The Month – CN BLUE

BIOGRAPHY
The Artist Of The Month for April is the pop rock band CNBLUE.

CNBLUE started to gain attention before they made their official debut as Jung Yong Hwa, the main vocal and guitarist of the group, co-starred in the popular TV drama “You Are Beautiful.” The band’s debut track combines solid beat with catchy melody, completing a punk rock piece that expresses the band’s concept well. In addition to Jung, the are three other members are guitarist Lee Jong hyun, drummer Kang Min Hyuk, and rapper Lee Jung Shin. The name CN BLUE stands for Code Name BLUE and the word “BLUE” represents four concepts – burning, lovely, untouchable, and emotional.

They started as an indie band in Japan where they began to perform on the streets and in live clubs there. In Japan, they released few singles in English and Japanese.

The band debuted in Korea with their first mini album “Bluetory“ in 2010. Their debut song “I’m a Loner” shot up to number one on all the online sales charts upon release and became one of the major hit songs for 2010. In addition, their follow up hit “Love” spent six weeks on top of our soompi chart and was named our “Song Of The Year” in 2010. They also received awards as Best New Artist in year end awards show.

In a step towards becoming recognized as true musicians, the album contains a total of 12 tracks with songs personally written and composed by the members themselves. Not only does it contain a slew of new songs, but the band’s past releases in Japan as well, such as “One Time” and “I Don’t Know Why,” both of which previously landed in the Oricon’s charts.

Their title track, “Intuition,” features a strong guitar sound with rhythmical, yet powerful vocals to round it out. Leader Jung Yonghwa participated in the writing, composition and arrangement for “Love Girl,” as well as member Lee Jong Hyun in “Love Rides the Rain” and “Thank You.” “Just Please”, a track off of their Japanese single, features newly written Korean lyrics by Yonghwa as well.

Artist Of The Month
CNBLUE
How does this article make you feel?