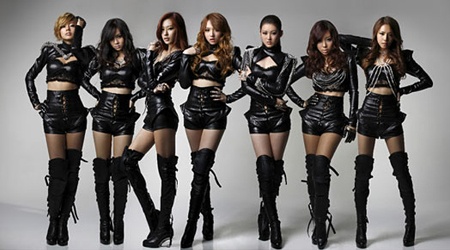 Rookie group RANIA (short for Regeneration Idol of Asia) is set to debut into the kpop scene. The seven member girl group held a showcase on April 6th, and reporters swarmed to catch a glimpse of this much anticipated group produced by sensational producer Teddy Riley.

American producer Teddy Riley is famous for working with internationally popular artists like Michael Jackson, Lady GaGa, Rihanna, Christina Aguilera, Spice Girls, and the Pussycat Dolls. It’s no exaggeration to say Ted Riley is more than RANIA’s executive producer. He was one of the key players in making decisions regarding RANIA – from concept to choreography to wardrobes. According to RANIA’s agency DR Music, RAINA stayed in Los Angeles for three months to work on their album, and their studio was frequently visited by celebrities like the Jackson family, Rihanna, and Snoop Dogg who “looked over” RANIA as they prepared for their debut.

In a video message played at the showcase, Teddy Riley said, “The two songs for RANIA were originally for Lady GaGa, but it was given to them because it was perfectly in line with their style. I want to introduce RANIA to the American market as well, and I believe they will be as successful as the Spice Girls, Destiny’s Child, and the Pussycat Dolls.”

The group consists of seven international members: Seam, Riko, Jooyi, Di, Joy, T-ae, and Xia. Joy is from Thailand and dreams of becoming “the second Nichkhun.” She was discovered at an audition in Thailand where she beat 3,000 other competitors. T-ae is also known for her role as Jay Park’s sister in his movie Hype Nation. Additionally, main vocal Jooyi has been recognized by the Jackson family for her strong singing skills. Each of the members has participated in various commercial shoots as well as movies before their official debut as RANIA.

At the showcase, RANIA performed a sexy and powerful dance for their title track Dr. Feel Good, differentiating themselves from the current slew of bubblegum pop girl groups. Teddy Riley’s work Dr. Feel Good is a mix of hip hop and R&B with addictive lyrics. The girls commented, “We’ve been training for four years for this moment. We’re all very happy, excited, and nervous; and we hope to succeed in both Asia and America.”