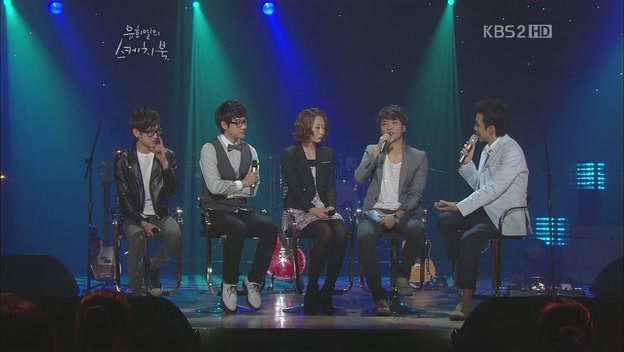 Modern rock band, Monni begins its third album promotions by performing on the latest episode of “Yoo Hee Yeol’s Sketchbook” for the first time. The four-member band brings their musical talents on stage with two songs – “With You” from their second album, “This Moment” and “Don’t Hesitate,” the title track from their latest album, “Just One Trip.”

During the interview section of the show, Monni also shed some light on the band’s name, how they came about, their working habits, as well as other fun facts. The vocalist, Kim Shini began by explaining that the dictionary definition of Monni is a person who doesn’t get proper treatment, but tries to claim this right. The vocalist saw this word in a newspaper and was determined to name his future band after it. He also mentioned how he wanted a female bassist, having been influenced by the famous American band, Smashing Pumpkins. It was then when Kim persuaded bassist Lee In Kyung to leave her former band for his. The vocalist would later find guitarist Gong Tae Woo from yet another band and drummer Jung Hun Tae from his neighborhood.

Monni also mentioned that unlike other bands, they work on their music in the morning at 10AM. It was difficult for some of the members to adjust at first, but they got used to this schedule after following it for five years. Yoo Hee Yeol also mentioned that bassist Lee In Kyung looked sleepy, and she explained that it was due to watching horror movies late at night. She further commented by saying that the best way to watch horror movies is alone at night without any disruptions.

Monni’s latest album is currently out for free downloading for a month. However, fans should definitely purchase a copy if they get the chance!