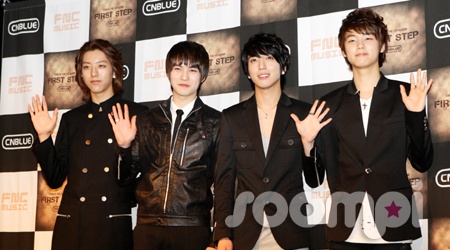 CNBlue is finally free from plagiarism accusations for their debut track I’m a Loner. On April 13th, Seoul Central District Court judge Park Jung Gil ruled in favor of co-composers Kim Do Hoon and Lee Sang Ho of I’m a Loner. Back in March 2010, indie band Ynot filed a $50,000 lawsuit against the composers for plagiarizing their song Bluebird for the chorus of I’m a Loner.

After consulting with specialists, who analyzed the harmony and melodies of both songs, the judge decided that the two were not the same. He ruled that the melody of I’m a Loner’s chorus is quite common and that there have been many songs in the past that sounded similar.

This case is quite significant because it is the first time the judge has ruled in favor of the defendant in a plagiarism dispute case. With endless controversies about plagiarism in the entertainment world, this victory is bound to have some influence.

While songs may sound similar to the naked ear, they can come out to be completely different when analyzed. However, when is the last time you analyzed songs by harmonies and melodies to differentiate between similar songs?

controversy
Jung Yong Hwa
lawsuit
plagiarism
How does this article make you feel?