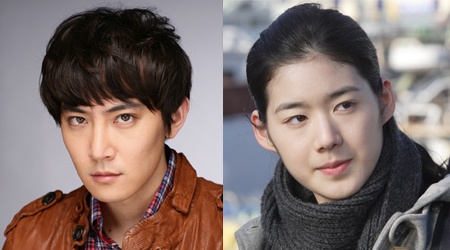 Jay and Jung Eun Chae Leading Cast For “Our Women”

“Our Women” will be filling in the time slot for “Smile, Donghae” and now the leading casts for the male and female roles have been set. Jay and Jung Eun Chae are the lead roles. Jay is originally from SM Entertainment’s “Trax” which was an idol group and he also played the role of Yoo Min Ki from KBS2’s “President.”

On “Our Women,” Jay plays the successor to a large company. He is an heir that has lived however he wanted to but after meeting Go Eun (Jung Eun Chae) he decides to give up his special status and take on the world on his own. It is intriguing to see how fellow “Trax” member No Min Woo is also acting in dramas such as “My Girlfriend is Gumiho” and “Midus.” The two seem to be having a friendly rivalry going on.

Jung Eun Chae is well known for her role in “Haunters,” on “My Women” she plays a strong woman who never loses hope in any situation and lives to realize her dreams.

KBS1 has traditionally used new actors and created them into stars. During KBS1’s time slot Yoona became famous through her role in “You are my Destiny.” Other people such as Kim Ah Joong, Han Hyo Ju, Kim Ji Suk, and Goo Hye Sun have become stars through this time slot. “Our Women” will begin its first broadcast on May 16th.

Haunters
J
TraxX
How does this article make you feel?