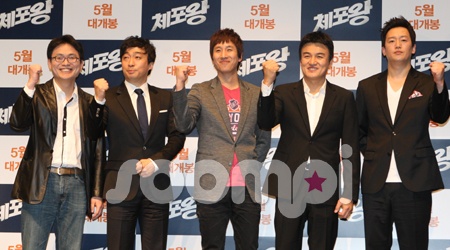 The press conference for action comedy flick Arrest King took place on April 5th. However, unlike other movie press conferences, actors Kim Jung Tae and Lee Sung Min came out as representatives of the Mapo Police Department and Seodaemun Police Department respectively and read out the 2011 first-quarter crime analysis reports. These two police departments, in reality, are fiercely competitive in raising their performances. Police detectives are given points for completing various cases; for example, arresting a burglar will get the detective 10 points, arresting a murderer will get him 50 points, etc. Points awarded are summed up, and the detective with the highest points is appointed the “Arrest King.” The movie seeks to shed light on what happens in Korean police organizations in real life.

The Mapo Police Department consists of Chief Jo Joon Gu (Joo Jin Mo), Team Leader Hwang Jae Sung (Park Joong Hoon), Detective Song (Kim Jung Tae), and Detective Shin (Jung Do Won), who are all very driven to achieve the number one spot no matter what. Their direct rivals are the detectives from the Seodaemun Police Department. The Seodaemun Police Department includes an inexperienced Chief Lee Yong Gab (Lee Han Wi), hopeless Jung Wi Chan (Lee Seon Gyun), breadwinner Detective Jo (Lee Sung Min), and eager pretty-boy Dtective Kim (Ahn Yong Joon). The two departments compete for the title of the Arrest King as they pursuit a serial rapist labeled the Mapo Balbari; whoever catches him will be rewarded 2,000 points. The movie chronicles the race between the two departments as they compete for the title of Arrest King by capturing Balbari.

Actor Park Joong Hoon has played many different types of police detectives in his career. He commented, “Every detective is different. You have the honest ones, the sleazebags, and those who are just tired of life itself. While a police detective is an easy role to act, it’s a hard role to play well.

With Arrest King, Lee Seon Gyun breaks away from his romantic guy image. He plays an intelligent police detective who graduated the top of his class at the Police Academy. Unfortunately, he lacks the street smarts and ends up losing his suspects every time. Veteran actor Park Joong Hoon could not praise Lee enough at the press conference. Park said, “Lee Seon Gyun is energetic, sincere, and thoughtful.”

Park Joong Hoon also commented, “Arrest King is a based on what truly goes on inside Korean police organizations.” There have been many police action movies in the past, but none of them delved as deeply into the dark world of the organization as this upcoming movie. Arrest King will open in theaters sometime in May.